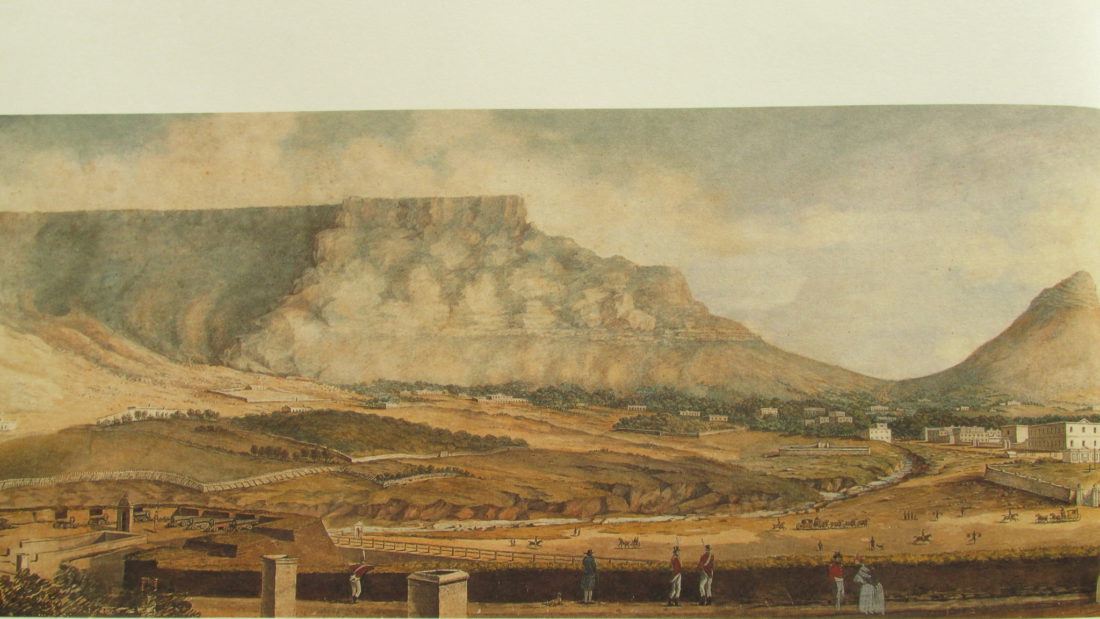 Taboa do Cabo, or Table of the Cape, was the name originally bestowed on Table Mountain by the first European to land in Table Bay. In 1503, Portuguese sailor, António de Saldanha, made the scramble up what is now Platteklip Gorge – not as a happy hiker, but rather in an effort to find a vantage point and assess the lie of the land (his sailing fleet had lost its bearings on their journey around the Cape of Storms).

While he made history books for his ‘accidental’ discovery, our focus is not on Mr. de Saldanha, but rather, in the spirit of Women’s Month, one of the mountain’s female conquerors. Almost 300 years after António scaled the beast (admittedly, we do seem to have been just a little slow on the uptake here ladies), the first woman was recorded as having conquered the ascent. We emphasise ‘recorded’ as even Lady Anne Barnard herself agreed that countless local women would most definitely have ascended the mountain before her triumph as the first European female.

During her five-year residence in South Africa, Scottish travel writer, artist and socialite Lady Anne Barnard kept diaries and letters of the places she visited, the people she met, and the events and social happenings of the time. I was lucky to stumble across a virtual treasure chest of her letters, entitled South Africa a Century Ago, including a detailed account of her infamous Table Mountain expedition, where she ascended Platteklip Gorge with a posse of companions, several slaves, and a rather extravagant picnic basket. Here are some of the most fascinating anecdotes:

“I must now tell you a little about a Cape expedition of mine. Having been told that no woman had ever been on the top of the Table Mountain (this was not literally true, one or two having been there), and being unable to get any account of it from the inhabitants of this town, all of whom wished it to be considered as next to an impossible matter to get to the top of it, as an excuse for their own want of curiosity, and having found the officers all willing to believe the Dutch for ditto reason, laziness to wit, there was some ambition as a motive for climbing, as well as curiosity. And as Mr. Barrow 19 is just one of the pleasantest, best-informed, and most eager-minded young men in the world about everything curious or worth attention, I paid him my addresses and persuaded him to mount the mountain along with me.”

“It is 3,500 feet in height, and reckoned about three miles to the top of it from the beginning of the great ascent, the road being (or rather the conjectured path, for there is no road) necessarily squinted in the zigzag way which much increases the measurement of the walk. At eight o’clock in the morning Mr. Barrow and I, with our followers, set off. We reached the foot of the mountain on horseback, and dismounted when we could ride no more – indeed, nothing but a human creature or an antelope could ascend such a path.”

“We first had to scramble up the side of a pretty perpendicular cascade of a hundred feet or two, the falls of which must be very fine after rains, and the sides of which were shaded with myrtles, sugar trees, and geraniums. We continued our progress through a low foliage of all sorts of pretty heaths and evergreens, the sun at last beginning to beat with much force down on our heads, but the heat was not, though great, oppressive.”

View from the top

“Once more we set off, and in three hours from the bottom of the mountain reached the very tip-top of this great rock, looking down on the town (almost out of sight below) with much conscious superiority, and smiling at the formal meanness of its appearance, which would have led us to suppose it built by children out of half a dozen packs of cards. I was glad on this pinnacle to have a bird’s-eye view of the country, the bays, and the distant and near mountains.”

“On the top of the mountain there was nothing of that luxuriancy of verdure and foliage, flower or herbage, described by travellers; there were roots and some flowers, and a beautiful heath on the edge of the rocks, but the soil was cold, swampy, and mossy, covered in general with half an inch of water, rushes growing in it, and sprinkled all over with little white pebbles, some dozens of which I gathered to make Table Mountain earrings for my fair European friends. We now produced our cold meat, our port, Madeira, and Cape wine, and we made a splendid and happy dinner after our fatigues.”

What goes up must come down

“If it was difficult to ascend the hill, it was much more so to descend. The ladies were dressed for the occasion, else – I need not say more after the word ‘else.’ The only way to get down was to sit down and slip from rock to rock the best way one could. My shoes I had tied on with some yards of tape, which had been a good scheme. At last we reached home, not more tired than I expected we should have been, and more than ever convinced that there are few things impossible where there is, in man or woman, a decided and spirited wish of attainment.”

The header image depicted is one of four contiguous panorama watercolours painted by Lady Anne Barnard as she viewed Cape Town and Table Mountain from the Castle, her home in her first few years at the Cape, between 1798 and 1802. Image accessed at: https://clingham.blogs.bucknell.edu/2015/06/14/up-table-mountain/