Why is Table Mountain flat? 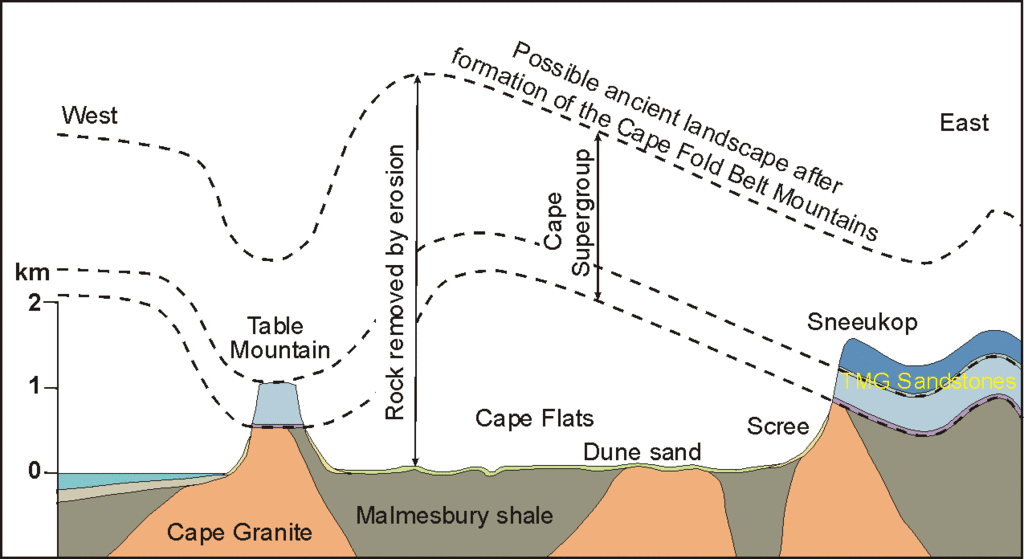 Why is Table Mountain flat?

The geology behind Table Mountain is something we don’t often engage with, yet it’s because of this peculiar, flat-topped phenomenon that Cape Town is home to a World Heritage Site, one of the Seven Natural Wonders of the World – and plenty of tourists.

I decided to do some digging.

One of the things that makes Table Mountain so striking from a distance is its 1000m high, almost-vertical front face. It rises up from the coast very suddenly in a huge, angular mass, almost as if a large block of Earth simply popped up from below. What many don’t realise, however, is that what appears to be a standalone feature is part of something much, much greater. Table Mountain and the Hottentots Holland Mountains (seen across the Cape Flats to the East) both form part of a much larger mountain chain called the Cape Fold Belt. This extends 700km along the coast from Port Elizabeth to Cape Town, where it does a right-angle turn and continues North of Cape Town as the Cederberg.

The Cape Fold Belt Mountain chain formed over 200 million years ago during an ancient continental collision, where the Earth’s powerful tectonic forces pushed large masses of rock upwards. This transformed the Cape’s tidal flats into a ‘folded’ landscape, punctuated by mountain crests and valley troughs.

Counterintuitive as it may seem, Table Mountain was once at the bottom of one of these valleys. So how did this valley floor metamorphose into the mountain we know today?

Rock types of varying resistance beneath the Earth’s surface had a pivotal role to play. There were 3 key rock groups underlying the Fold mountains in the Cape Town area: Malmesbury Shale, relatively soft sedimentary shale which is easily worn away; Cape Granite, hard bulbous rocks formed from igneous intrusions; and Table Mountain Sandstone, hardened sedimentary sandstone formed from layers of compacted sand, silt and mud deposits, and composited on top of the granite and Malmesbury Shale.

Over the years, the ‘folded’ landscape began to weather and erode, but the exposed crests of the folds eroded before the troughs did. This meant that once the hard sandstone layer of the crest was worn away, the soft shale beneath it weathered more rapidly than the remaining sandstone troughs.  The shale surrounding these troughs continued to erode further and further, leaving the hard sandstone troughs behind, eventually resulting in what was once a flat valley floor becoming today’s flat-topped Table Mountain. Have a look at the image below, which helps to visualize this explanation. This is all very well, but why aren’t there any other mountains in the world that have formed in the same way?

Well, there are. ‘Table top’ mountains exist all over the world, often called mesas, tuyas, buttes or ambas, but none so famous as our Mother City’s marvel. Some of the more impressive ones include Mount Conner in Australia, Mount Roirama and Kukenan Tepui, both of which are found in Venezuela.

Source: John Compton’s The Rocks and Mountains of Cape Town (2004)

*This article was first published in 2016.