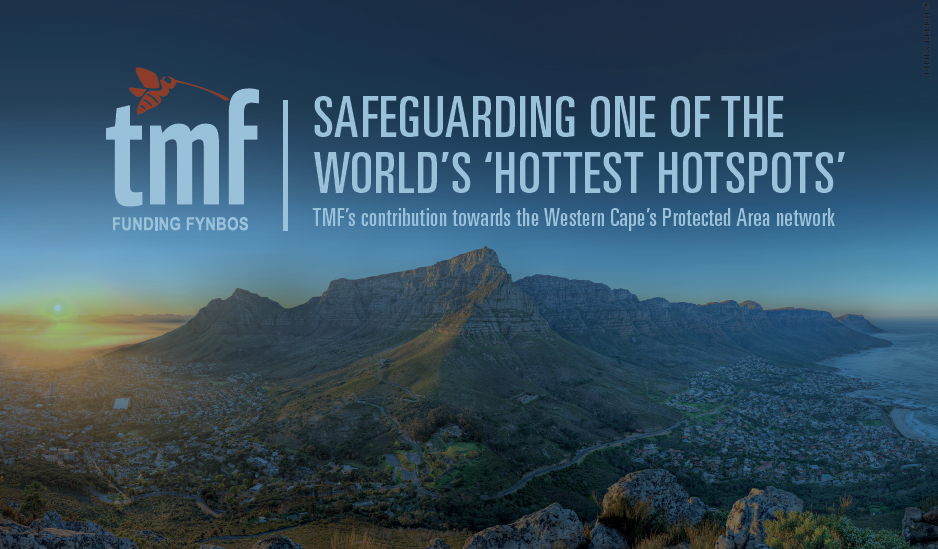 South Africa’s Western Cape province is home to the smallest yet richest plant kingdom in the world. The Cape Floristic Region (CFR) sustains well over 9000 plant species, with almost 70% of these endemic to the Cape. But the diversity, density and endemism of this system is highly threatened. Growing developmental pressures linked to South Africa’s emerging economy, coupled with improper land-use planning, bear the risk of significant natural habitat loss. These burgeoning threats to a system of such biological importance have earned the CFR World Heritage Site status as well as biodiversity hotspot acclaim.

At a global level, it is our moral responsibility to conserve this world-renowned biodiversity hotspot and World Heritage Site; and as a signatory committed to the goals of the Convention on Biological Diversity we have a political obligation to protect it. Locally, we have a responsibility to protect our invaluable natural heritage – and the economic value of the ecosystem services that it offers – for present and future generations.

In its capacity as a capital Conservation Trust aimed at protecting and restoring the natural heritage of the CFR, the Table Mountain Fund (TMF) develops and funds projects that secure biodiversity through Protected Areas. Since its inception, TMF has worked to achieve formal land protection with a range of conservation partners and via a multitude of mechanisms, some pioneering in this country, and many of which rely on public-private collaboration and a modern, innovative approach. Its contribution to the Western Cape’s Protected Area network is varied and far-reaching, with measurable results as testimony.

The Western Cape Protected Area Expansion Strategy (WCPAES) stems from South Africa’s National Protected Area Expansion Strategy, which aims to achieve ‘cost-effective Protected Area expansion for ecological sustainability and increased resilience to climate change’ at a national level. Drafted by CapeNature, the WCPAES aims to meet province-specific ecological requirements in terms of local biodiversity thresholds, and contribute to political commitments made at a national level. At the heart of both the national and provincial strategies is the need to ensure that biologically diverse land is kept safe from inappropriate development and that biodiversity targets are met.

After the first Western Cape Protected Area Expansion Strategy was drafted in 2010, TMF directed a significant portion of its investments towards supporting the implementation thereof. Since the formal establishment of the Biodiversity Stewardship and Protected Area Programme, the formal Protected Area network of the province has grown by 328 100 ha (roughly 37% of the network). During this period, TMF invested a total of approximately R13 000 000 within formal land protection projects in the Western Cape (of this, R3 900 000 was co-funded by the Millennium Trust.) These funds have fueled numerous successful formal land protection projects, with Protected Area expansion and regularisation as the core objectives.

A snapshot of some of the noteworthy partnerships and projects funded by TMF over the last 7.5 years includes:

TMF’s dynamic portfolio of work in the biodiversity conservation and Protected Area expansion spheres highlights its indispensable role in conserving the biodiversity of the CFR. Garth Mortimer, CapeNature’s Senior Manager for Protected Area Expansion & Stewardship, acknowledges TMF as the largest funding support to CapeNature’s Biodiversity Stewardship Programme, linked directly to incentivising Protected Area expansion. This withstanding, future challenges remain vast, and the need to continue and further build upon this contribution is crucial. With the sustained support of local and international donors and partners, TMF will be well-positioned to continue to make an enduring impact.