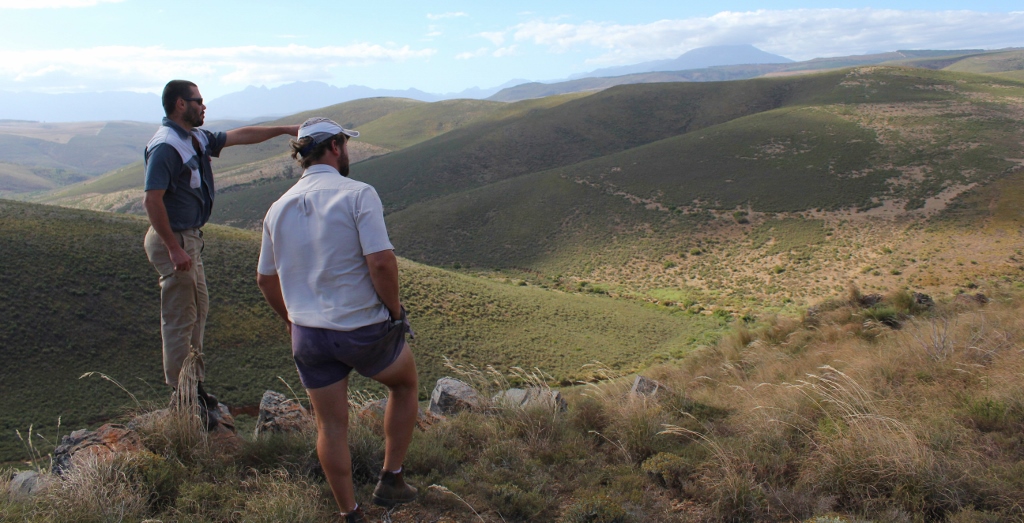 The Overberg Renosterveld Conservation Trust is undertaking a unique way to secure the long-term conservation of Critically Endangered Renosterveld remnants on privately-owned land. Funding from TMF has enabled them to take a novel approach to new levels of biodiversity stewardship, ensuring that hundreds of hectares of this severely threatened ecosystem are secured in perpetuity.

The Overberg Renosterveld Conservation Trust is a relatively young NPO and is the dream of ecologist and conservationist, Odette Curtis. Odette, with her passion for Overberg Renosterveld, started working in these renosterveld remnants in 2003 when she undertook a research project on Black Harriers (which became her MSc). Spending an extensive amount of time wandering around these fragments, she saw that the greatest threat to the tiny fraction (about 5%) of what remains is mismanagement. Not necessarily malicious mismanagement, but more a case of landowners not appreciating the uniqueness and rarity of these habitats and the dire need for conserving them.

Odette ended up on a contract post to CapeNature’s Stewardship Programme for four years and was successful in signing up a number of stewardship contracts leading to the conservation of over 1000 ha of threatened lowland vegetation. However, this was a drop in the ocean relative to the urgent need to secure thousands more hectares of renosterveld before we were to witness its permanent demise. Thus, the need for a non-governmental organisation that would focus entirely on renosterveld became very clear.

To this end, the Overberg Lowlands Conservation Trust (now trading as the Overberg Renosterveld Conservation Trust – ORCT) was founded in April 2012. For the first year of the Trust’s existence, it was run purely off a once-off philanthropic donation received through the auctioning of the naming rights of a recently-discovered Hesperantha species. Since this small and overwhelming beginning, the Trust has gone from strength to strength.

Some notable achievements are: They have initiated two pilot conservation easements, engaged with several landowners towards signing additional conservation easements, and discovered eight new plant species. They established a Renosterveld Reserve and the first-ever Renosterveld Research & Visitor Centre. They were awarded a Ford Wildlife Foundation vehicle, and their Director has been awarded two conservation awards. They secured substantial funding from the WWF-Nedbank Green Trust to catalyse a water-course / corridor restoration project and through this, were able to employ a very competent and passionate extension officer / project manager, Keir Lynch, to work on the ground with key landowners. They now have a total staff component of four people.

From here, they aim to grow their footprint further and are preparing the way for formal conservation on these critical remnants of renosterveld.

The Overberg Renosterveld Conservation Trust, works towards keeping severely transformed landscapes alive through the preservation of renosterveld habitats and their ecological functioning. In this way, they hope to conserve all life in the landscape. The Trust works with landowners in the Overberg Rûens wheat-belt to instil a sense of pride amongst farmers about their renosterveld remnants and to affect change in management, through incentivising landowners with advice and assistance with key management interventions.

Since ORCT has already established a 500 ha reserve in the Eastern-Rûens Shale Renosterveld (through a partnership project with WWF’s Land Programme), the next part of their strategy is to focus on the two other dominant renosterveld types in the Overberg, being Western– and Central– Rûens Shale Renosterveld. Thus, the TMF-funded Conservation Easement Project is catalysing a process which will secure the largest and most contiguous expanses of these two vegetation types for conservation in perpetuity. Two ‘hubs’ have been selected as a focus for this initiative and the TMF funding will enable them to sign up the first 4-6 easements in each of these clusters.

WHAT IS A CONSERVATION EASEMENT?

In the United States, a conservation easement (also called a conservation servitude) is a power invested in a qualified private land conservation organization (often called a “land trust”) or government (municipal, county, state or federal) to constrain, as to a specified land area, the exercise of rights otherwise held by a landowner so as to achieve certain conservation purposes. It is an interest in real property established by agreement between a landowner and land trust or unit of government. The conservation easement “runs with the land,” meaning it is applicable to both present and future owners of the land. The ORCT is using the American Easement model as an additional tool for biodiversity stewardship in the Overberg.