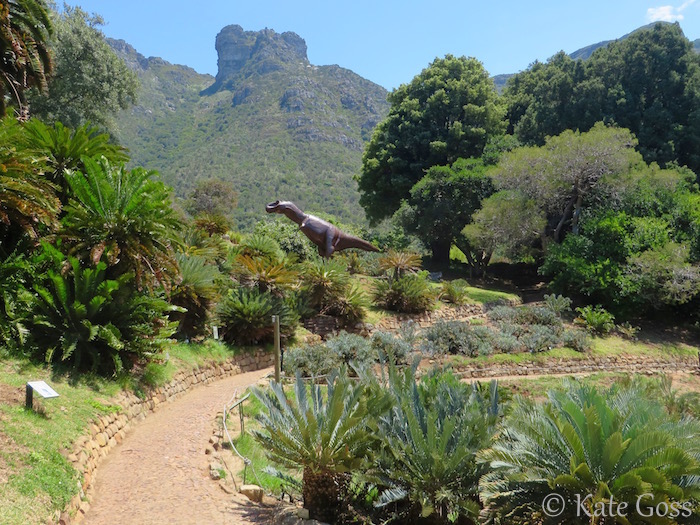 Kirstenbosch is no secret, that’s for sure. It’s considered one of the great botanical gardens of the world and without a doubt one of the Mother City’s most popular tourist attractions.

Despite the status and grandeur it’s built up over the years, if you spend some time exploring its deeper nooks and crannies, you’ll find a secret garden: a warren of pathways leading through forests, over streams, across lawns, and up the mountain. You’ll find the interesting nuggets that give the garden its character; the charms that set it apart from other botanical gardens.

Below are my 6 favourite spots in Kirstenbosch for exactly this reason:

A mossy, cobblestone path winds under the canopy of tall, shady trees and ferns, with a shallow stream babbling alongside. The Dell is arguably the most ‘magical’ part of the gardens, perhaps because it’s the oldest. It was laid out and planted in 1914, making some of its trees, like the Outeniqua Yellowwood and tree ferns, over a hundred years old.

Hopping along the stones as you make your way up the stream bed, you’ll find yourself upon an interesting structure: Colonel Bird’s Bath. This stone tub, often mistaken for being Lady Anne Barnard’s bath, was built by British Deputy Colonel Secretary, Christopher Bird. After he bought the Southern half of Kirstenbosch in 1811, he built this bird-shaped pond to collect spring water, allowing it to stand and clarify before being pumped to his house.

The bath is fed by a crystal-clear underground spring that flows at an average of 72 litres per minute, all year round!

‘Big’ is an understatement – this is one of the most gigantic trees you will ever see. It’s so wide you can almost climb inside its trunk, and its broccoli head of emerald leaves creates a dense, shady retreat on hot summer days. Adding to the marvel of its sheer size, this Forest Fig has an astonishing way of growing – instead of expanding from its trunk like a normal tree, it sends aerial roots out from its branches. Upon reaching the ground, these dig into the soil and start to grow, sending out more roots which then wrap around the trunk of the tree, hence the entangled ‘highway’ of roots that forms its base.

Perhaps my favourite thing about the Otter Pond is the quote engraved on its old stone wall:  “Our quality of life will depend on the ability of mankind to live in harmony with nature.” The statue of the Cape Clawless Otter in the middle of the pond is a wonderful reminder that these brilliant creatures (although rarely seen) are very much in our midst.

Higher up in the gardens, above the Dell, a natural amphitheater is home to a big collection of Cycads. These incredible plants are often called ‘Living Fossils’ because – simply put – they have hardly changed at all since the Jurassic Era 150-200 million years ago! Rare and endangered in their natural habitats, it’s a special thing to see 29 different species of cycad growing in one place.

And then there are the dinosaurs! The latest addition to the amphitheater is an exhibition aimed at raising awareness about the threatened state of Cycads, which could face extinction if the illegal sale of wild plants and the destruction of their natural habitats continues. Dotted amongst the cycads are life-sized dinosaur sculptures, formed out of tin by a young Zimbabwean artist. Not many botanical gardens can say they’ve got pterodactyls and T.Rexs!

You’ll no doubt have heard about the infamous Boomslang. This curved steel and timber walkway – formally known as The Centenary Treetop Walkway – snakes its way above the treetop canopy of Kirstenbosch’s Arboretum. Starting on the forest floor, the boardwalk winds and dips through lush forest shrubbery before rising up through the trees to 12m off the ground, giving walkers amazing panoramic views over the city suburbs, the gardens, and of course Table Mountain. At 130m long, it’s only a short stroll and definitely deserves to be walked both ways to get the most out of the views.

P.S. Excitement to get to the Boomslang often means one forgets to enjoy the Arboretum on the way.  This shaded forest is a peaceful sanctuary, thick with over 450 different Southern African tree species, and full of the chitter chatter of birds.

What an incredible setting in which to view our national flower.  The Protea Garden forms part of Kirstenbosch’s Fynbos Walk, which weaves between beds of impressive beds of Ericas, Restios and other fynbos types. This garden puts on its show in the Winter and Spring months, when King Proteas, Pinchushions and many other exquisite Protea species come alive with colour.

For more info about Kirstenbosch and a map of where all these spots are, please visit: http://www.sanbi.org/gardens/kirstenbosch