The majestic Clanwilliam cedar tree: Why we owe it a second chance 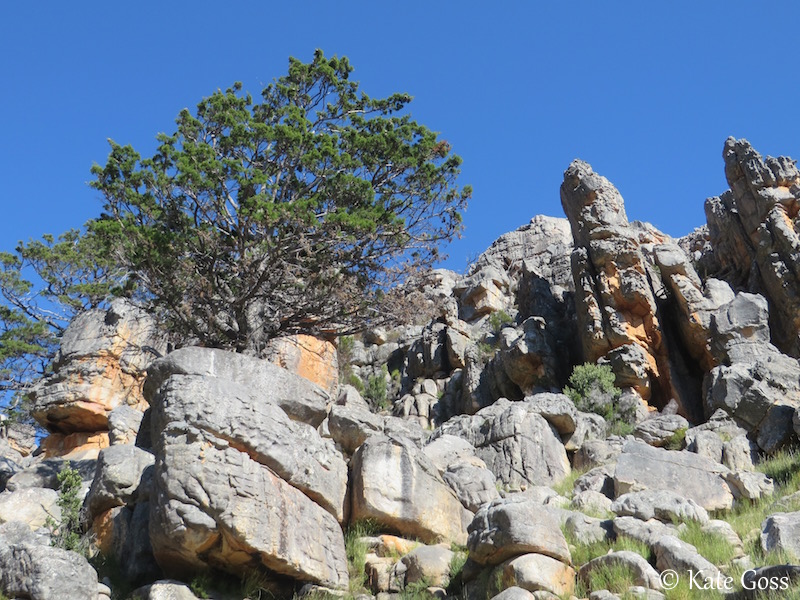 June 30, 2016 In Hike.Run.Explore, Icons of the CFK, Introductory Series, The CFK By Kate Black

The majestic Clanwilliam cedar tree: Why we owe it a second chance

Not so long ago, I had the privilege of sitting in the dappled shade of a magnificent Clanwilliam cedar tree. The 12 o’clock sun was baking, and we were scrambling uphill, rock-hopping, missioning, endlessly, until among the stark, Cederberg sandstone came a brief moment of respite: a cool, flat rock under a mushrooming green canopy.

Not many people know that the Clanwilliam cedar (Widdringtonia cedarbergensis) is found only in the Cederberg – and nowhere else on the planet. Moreover, while these trees used to be spread across the entire Cederberg mountain range, records say that by 1883 all accessible trees of commercial value had been felled – and they now occupy only a confined area of about 250km2 within the region.

So a privilege it was indeed, to sit under the canopy of a large cedar, and that brief contact left me wanting to know more.

The ‘cedar’ in Cederberg

The Cederberg we know today owes its namesake entirely to the Clanwilliam cedar tree, which was once a prominent feature of the area. Today, the scarcely populated species has become a symbol for the conservation of the region’s fragile ecology.

Belonging to the genus of cypress pines, these regal trees are known to be extraordinarily long-lived (some as old as 1000 years old) and some of the larger specimens found today are as tall as 20 metres. Fire is for these trees both a secret weapon and an Achilles’ heel: while they need fire for seed germination and to remove vegetation which inhibits young seedling growth, their resinous bark is highly flammable (ref), which means that severe fires can wipe out large numbers of mature trees at a rapid rate.

Why is the cedar tree endangered?

Unfortunately for the cedar, it’s wood has a beautiful light-yellow colour, it is extremely durable and it has a wonderfully fragrant scent. Once humans wisened to the commercial value of its timber, the tree became an attractive construction material for anything from furniture (doors, chairs and church pews) to ship building, fences to telegraph poles. One shudders to think that in 1879, the telegraph line between Piketberg and Calvinia was made with over 7000 cedar poles (ref).

As is inevitably the case with years and years of continued unsustainable harvesting, cedar numbers dwindled drastically. This, coupled with the effects of an increase in fire frequency, has resulted in the species being listed as Critically Endangered on the IUCN Red List and at high risk of extinction in the wild.

What’s being done to save the cedar?

Mercifully, the Cederberg was proclaimed a Wilderness Area in 1973, and a 5250-hectare reserve within this Area was established in 1987, with specific protection of the cedar tree as its aim (ref).

Since then, numerous programmes have been launched, aimed at restoring the species by planting nursery-grown cedar seedlings in the Cederberg mountains. Cedar groves have been planted in rocky areas which are protected from fires, and community cedar-planting events take place annually. The challenge that still persists, however, is that the survival rate of the seedlings to date has been only about 40% (ref) and, provided they do survive their early years, studies say that the trees take about 30 years to produce their first seeds.

The Cederberg, which forms part of the Cape Floral Region, is a World Heritage Site. This status serves to further reinforce the importance of restoring the region’s natural ecological balance, through habitat and species protection. Awareness of the plight of the cedar is key and it is inspiring to see organisations and communities banding together in an effort to sew the (literal and figurative) seed.

With this in mind, next time you visit the Cederberg and find yourself lucky enough to come across a Clanwilliam cedar, remember its story and and look upon it with respect. After all, if it wasn’t for these majestic trees, the Cederberg as we know it simply wouldn’t exist.