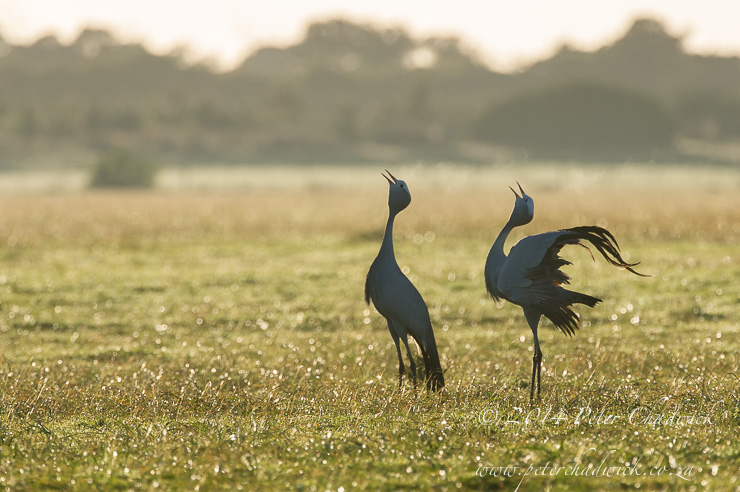 Last week, while driving through the Swartland’s lush wheat fields, I was met with a spectacular sight, at least 20 Blue Cranes were wandering through the green fields. It was enough to cause a minor traffic jam as day tourists pulled over to photograph our national bird. While those of us in the Cape appreciate this beautiful sighting, we don’t always realise how lucky we are to witness this majestic bird so regularly.

About Our National Bird

South Africa’s national bird, the Blue Crane (Anthropoides paradisea), is endemic to southern Africa, with 99% of the population occurring within our borders. The Blue Crane is also known as the Stanley Crane or the Paradise Crane. The pale blue-grey crane is a tall, ground-dwelling bird, that stands a little over a metre high. They are usually seen in pairs or small family groups and are altitudinal migrants that generally nest in the upper grasslands, and migrate down to lower altitudes for winter.

Outside of South Africa there is a very small population of about 60 individuals, living around Etosha Pan, in northern Namibia, and on occasion there have been sightings of isolated breeding pairs in South Africa’s other neighbouring countries.

In the 1970s a population decline began and our national bird is now classified as vulnerbale. This decline has been largely due to habitat destruction, with the conversion of grasslands into commercial tree plantations playing a major role; and poisoning, both deliberate to protect crops and accidental (crop dusting etc). Since the 1970s Blue Crane populations have declined by up to 50%.

While numbers are still declining the South African government has stepped up legal protection of the Blue Crane. NGOs have also increased their conservation efforts and extensive projects have been launched to save this national icon. These projects are focused on research, education, habitat management, and recruiting the help of private landowners.

Did you know that mated pairs of Blue Cranes engage in what is referred to as “unison calling”. This is a complex series of co-ordinated calls which go on for an extended period of time. The posture involves the cranes throwing their heads back and thrusting their beaks skywards. The male, who instigates the calls, always lifts up his wings during the call, while the female folds her wings at her sides. Blue Cranes are also known to engage in different forms of “dance” which include bowing, running, stick throwing, wing flapping and jumping. While this behaviour is usually associated with courtship, it is also believed to be a normal part of the motor development of Blue Cranes and some believe that they use it to relieve tension and to thwart aggression. While Blue Cranes are usually quiet birds, they do have a fairly high-pitched call and a distinctive rattling croak, which can be heard for quite a distance.

Next time you see Blue Cranes in a field, if possible stop and from a distance observe them, photograph them, enjoy being in their presence, you will be well-rewarded.