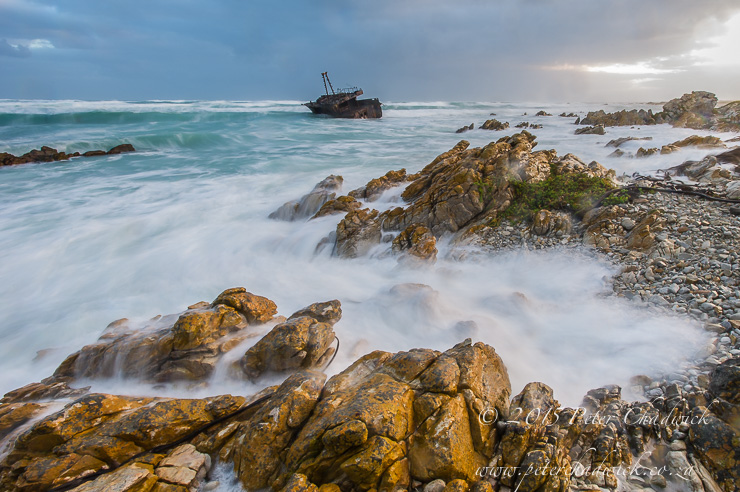 December 2, 2015 In Places By Peter Chadwick

The Agulhas National Park was originally proclaimed on the 23rd of September 1999 and started off as a 4 ha portion of land. It is situated at the southern-most tip of Africa where a rugged stretch of coastline has claimed many a ship through history. The species-rich biodiversity is based upon unique vegetation that includes mountain, coastal and limestone fynbos with most flower species blooming between May and September.

As a popular tourist destination, most visitors consider the historic lighthouse, the plinth depicting the splitting of the Indian and Atlantic Oceans and perhaps also the wreck of the Meisho Maru as all that the Agulhas National Park has to offer. How wrong they are, for there is now a range of accommodation scattered right across the 21 000 hectares that provide a gateway to endless opportunities for exploring this extremely diverse and scenic landscape.

The rest camp, with its thatched units cleverly spaced amongst indigenous fynbos lies within a stones throw of the ocean and from here, several nature trails cover the area. The Rusperspoint Trail wanders along the coastline where mullet, klipvis, sea-urchins, cushion stars and anemones may be found in amongst the rock pools and at Pietie-se-Punt, a large circular and well-sheltered lagoon is home to flocks of terns, gulls, cormorants and pairs of African black oystercatchers.

A short drive from the main camp takes one to the Rhenosterkop farmstead that was originally built in 1742 and has now been renovated into visitor accommodation where brilliant red Brunsvigia orientalis flowers add color to the historic landscape. At Bergplaas, a walk through the veld shows just a few of the reported 2500 different plant species, including proteas, cone bushes, mimetes and restios. The flowers of pelargoniums, ericas, lobelias and many others attract Orange-breasted and Southern Double-collared Sunbirds, as well as the larger Cape Sugarbirds.

Rietfontein Guest Cottages are found in the heart of the lowland fynbos where herds of springbok graze the lawns and Cape River Frogs and Clicking Stream Frogs call constantly from the nearby stream. Bright pink stands of Amaryllus bulbs together with stands of Protea Suzannae, dainty gladilous spp and Erica plunkenetti are common.

Without a doubt, this rugged piece of coastline and its interior that is so full of life, needs to be fully explored over repeated visits.

From Cape Town, Agulhas is a two and a half hour drive along the N2 to Caledon. Follow the R316 to Napier and Bredasdorp. Signage clearly indicates the route to Agulhas.

Summers are warm and winters are mild. Wind is present throughout the year with rain falling mainly in the winter months. Always be prepared for sudden changes in the weather. The best months to visit are April and September

A variety of accomodation is now available within the Park from the self catering chalets at the Rest Camp and Lagoon House that lie within a stones throw of the coastline through to the historical farmsteads of Rhenosterkop, Rietfontein and Bergplaas.

Agulhas National Park has much to offer, from looking out for locally endemic birds through to enjoying the approximately 2500 different species of plants. Long coastal walks showcase both the biodiversity and the rich history of the area while the settings for the various accommodation options allow the soul to relax and recharge. Remember to ask the SANParks office where you will need a special permit to gain access. Fishing will require a permit that can be obtained at a local post office.