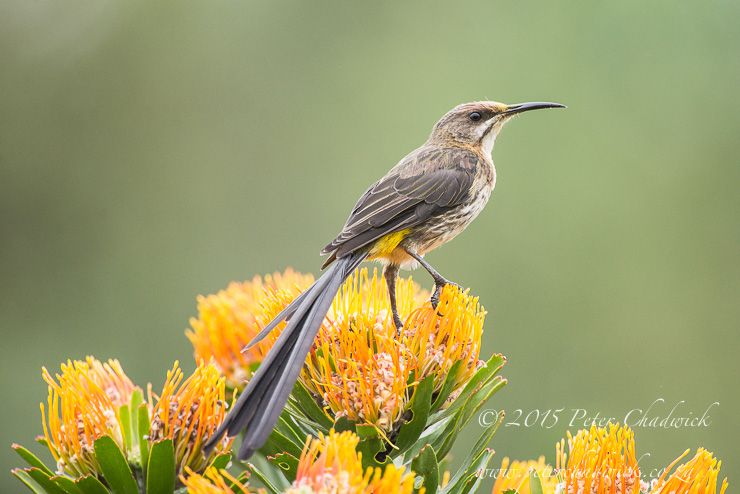 July 6, 2015 In Birds, Endemic Birds, Icons of the CFK By Peter Chadwick

The Cape Sugarbird is one of two endemic sugarbird species to be found in South Africa and is restricted to the Cape Floristic Kingdom between the Cedarberg Mountains and the Buffalo River near East London, where its distribution is linked to the occurrence of Protea species. It is an altitudinal migrant during summer and winter and when it is not breeding.

The Cape Sugarbird is easily recognizable with its drab coloration, yellow vent, long flowing tail (which is longer in the males) and its long decurved bill. It is a specialist nectivore with a long brush-tipped tongue that is adapted to absorbing nectar through capillary action. They are important pollinators of the fynbos and in sunny weather, may visit a few hundred plants per day. The Cape Sugarbird will also feed on insects that are often hawked from the air.

Out of the breeding season, Cape Sugarbirds have been known to roost in small groups, though during breeding they are monogamous. Male sugarbirds will often perch on top of prominent protea bushes from where they repeatedly call and they also undertake wing-flicking display flights where the tails are flapped jerkily behind them. Breeding mainly takes place between April to August and the nest comprises of an untidy cup of twigs, grass and rootlets that is lined with protea down and is built only by the female. The two buff coloured eggs may be blotched and scrawled with brown and take 17 days to hatch, with the chicks remaining in the nest for between 17 and 21 days.