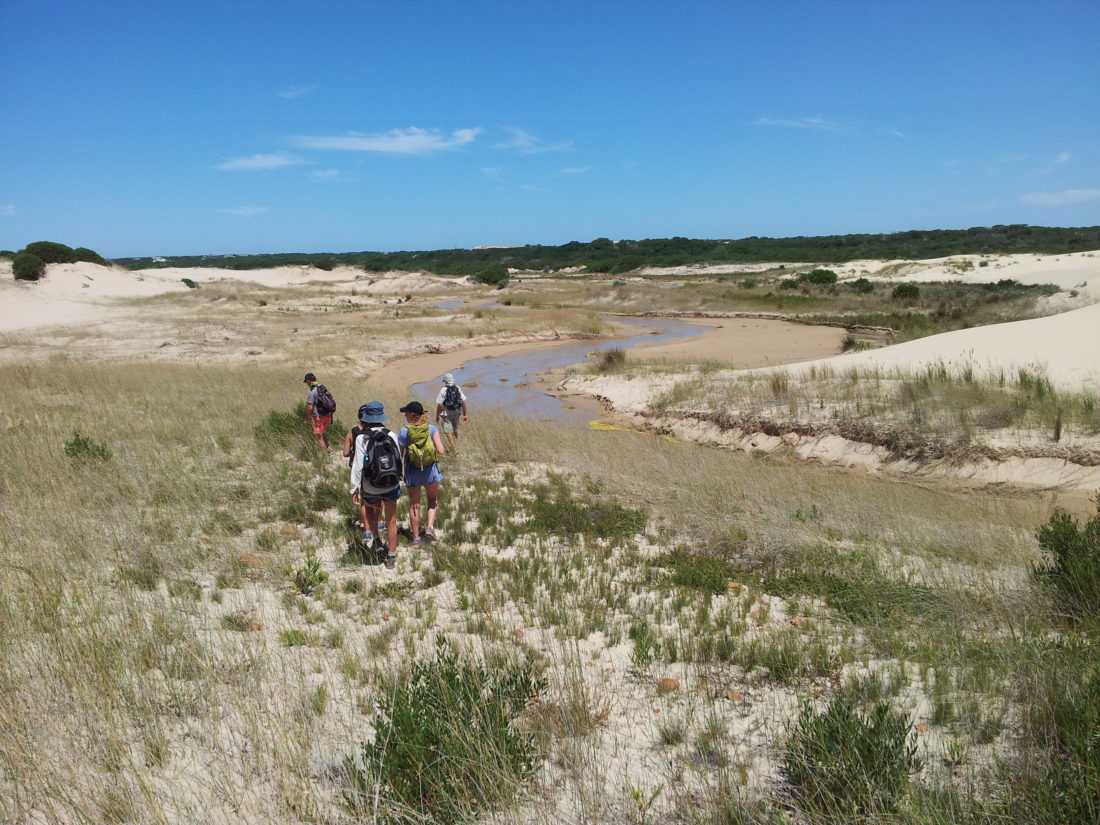 By Wentzel Coetzer and Kevin McCann

Some of the greatest hindrances to securing new Protected Areas are the costs associated with the formal declaration process, as well as the challenges of resourcing the ongoing post-declaration support to privately-owned Protected Areas (in order to ensure their effective conservation management).  For the past four years, this has been the focus of a TMF-funded project, in partnership with the Greater Kromme Stewardship (GKS) Initiative, in the Kouga region of the Eastern Cape.

The four declared sites include: the Kromensee Nature Reserve (155 ha), the Sand River Private Nature Reserve (120 ha), the Oubos-Grootrivier Nature Reserve (51 ha), and the Kromme-Geelhout Protected Environment (90 ha).  Both the Kromensee Nature Reserve and the Oubos-Grootrivier Nature Reserve are located along a pristine coastline and both include estuarine systems, threatened habitat types, and flora species that are unique to the Cape Floristic Region.  The Sand River Private Nature Reserve protects a significant part of the dynamic Sand River system, as well as one of the finest examples of a Headland Bypass Dune-field system.  The reserve has a diverse range of terrestrial and aquatic habitats, including a unique combination of mobile sand dunes, wetlands, dune streams and pools, and a fynbos-thicket mosaic containing an extraordinary number of threatened and endemic flora species.  The Kromme-Geelhout Protected Environment secures important estuarine salt marshes and riparian thickets that are associated with Kromme River and Geelhoutboom River, as well as a highly threatened fynbos type known as Humansdorp Shale Renosterveld.

Through TMF funding the GKS initiative was also able to provide professional post-declaration support and appropriate incentives to landowners who have committed their land to conservation.  Landowners of 7 new and prospective privately-owned Protected Areas were supported to access appropriate biodiversity tax incentives, thereby assisting the landowners’ ability to finance the long-term conservation management of their land.  Furthermore, in recognition of landowners’ long-term conservation commitment, appropriate signage was procured for 7 of the new Protected Areas secured through the project.  TMF funding also enabled the procurement of equipment (including 5 camera traps) to implement systematic wildlife monitoring programmes on selected Protected Areas (wildlife monitoring is an important part of managing Protected Areas, since it generates information that can be used to help inform management decisions).

In addition to securing these new Protected Areas, the project has also enabled the GKS Initiative to support a process to help improve the protection and management of several under-protected state-owned areas with highly threatened biodiversity, totaling 888 ha.  Most notably, the funding made it possible to acquire the necessary legal expertise and support to resolve complex and intractable ownership issues that have prevented the formal declaration of a local authority Nature Reserve in the coastal town of Cape St Francis, since the early 1990s.  This has unlocked the ability to finally secure the Cape St Francis and Irma Booysen Local Authority Nature Reserves through formal declaration.