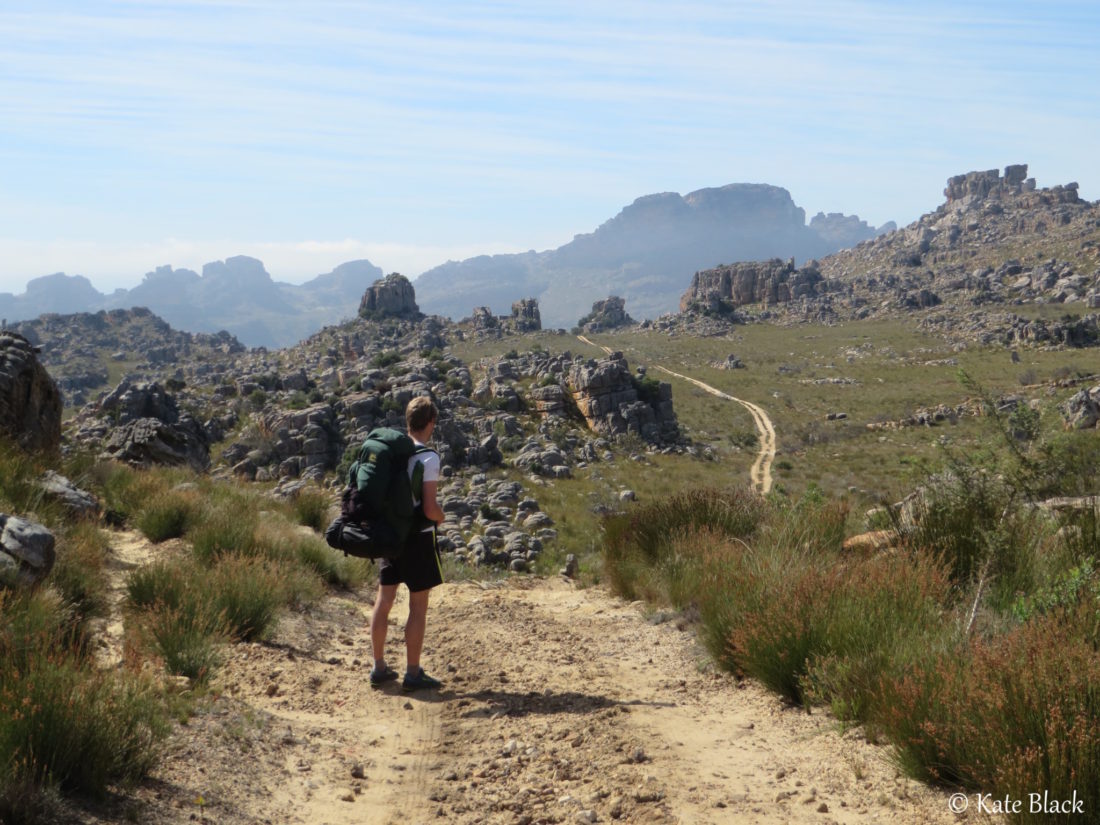 We woke up in the cloud. Unzipping the tent after a chilly night on the mountain (and an unrelenting scuffle with a persistent bush rat), we stepped into an icy breeze with mist all around us. First, warm tea, coffee and oats – then the unfortunate job of putting on our wet clothes from the day before. Soggy gloves and icy socks, we were optimistic that the sun would come out. And it did.

Last month, we set off on a 5-day traverse through the Cederberg Wilderness Area. Just two of us, backpacks full of camping gear and food, and not a hint of a connection to the ‘real’ world. Having hiked various sections of the Cederberg before, we were excited to connect the various legs, starting at the top of Pakhuis Pass and making our way all the way down to Sanddrif further south.

For the most part, the route is relatively unfrequented (we came into contact with people only once along the route), and it felt incredibly untouched. Our frantic lives leave very little opportunity to fully disconnect – and this was one of the best ways to do it. A ‘must’ for avid hikers and lovers of the Cederberg.

Here’s what we did:

Day one always involves some backpack bonding (it never feels quite right in the beginning, and it’s at its heaviest before any of the eating starts), so we took our time, enjoying the warm weather ahead of the looming cold front that we knew was approaching that evening.

The route started off on a jeep track, through ‘bouldering’ country and over a pass towards Heuningvlei village. Bypassing the village, we continued on to Heuningvlei Hut at the base of Groot Krakadouw, where a patch of lawn next to a stream made for a peaceful lunch spot. The jeep track then continued for a few km’s before turning off onto the trail for Boontjieskloof Hut (the latest Slingsby map and GPS were our saviours here, as we’ve missed this turn-off many times before).

25kms later, we were excited to clap eyes on the hut itself. With a newly refurbished roof and windows, it’s one of the best hiking huts we’ve seen. This was lucky for us – as the torrential downpours that ensued that night and the following day meant we got to know it very well. 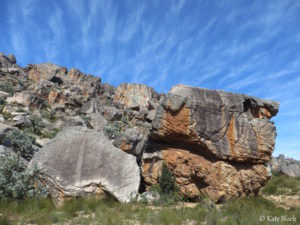 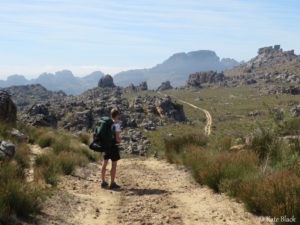 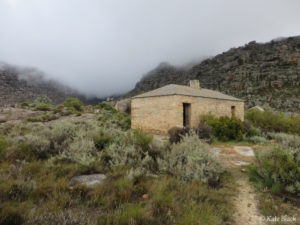 Day 2: A rainy day at Boontjieskloof, and a late start to Vangstasie

Having kept warm and dry during the stormy night, we woke up, legs rested and ready to hit the path. But the weather disagreed, and it proceeded to rain heavily until 4pm that afternoon. The best part? There was nowhere to go and no-one to contact, so we curled up in our sleeping bags and read our books, interrupted only by the odd cup of tea.

When the rain finally abated, we dressed warmly and took the gap. Through patches of sun and cloud, we hiked up the spectacular Skerpioenskloof, with a river raging in torrents down the middle (raging river crossings in the Cederberg was a new one for us!) Getting wet was inevitable, and it was only as we reached the top of the pass and became enveloped by cloud, that the teeth started to chatter.

When we eventually made our way down the pass and onto the contour on the other side, it had got dark and we had our head torches out in search of somewhere flat to camp. Wet clothes, a chilly night and a persistent bush rat at a spot called ‘Vangstasie’ ensued. 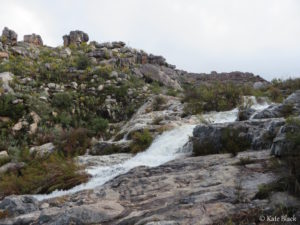 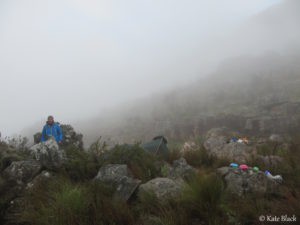 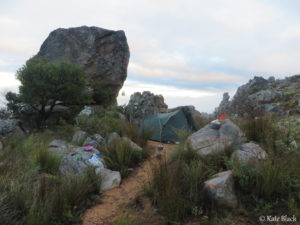 Anxious for the sun to come out so that our clothes and tent could dry, we hit the trail early, missioning past Anvil camp, and up to the most spectacular valley of Cedar trees. These gnarly old grandfather trees were some of the biggest we have ever seen, and we felt hugely privileged to be somewhere so remote that it had escaped the clutches of the Cedar wood industry.

The trail led us on to Crystal Pools (too chilly to swim!) and then up Engelsmanskloof (so named due to a skirmish that took place between a lone Englishman and a Boer Commando during the Boer war; the Engelsman came off second best). As we climbed, the sun began to peak through the clouds, and when we reached the top of the pass we were able to empty our backpacks to dry our motley collection of wet belongings as we had some lunch.

Once again on a jeep track (known as ‘Die Trap’), we marched along the base of Sneeukop, heading towards Sleeppad Hut. Here, in the distance, we saw another group of hikers, and were reminded that we weren’t the only people on the planet!

Without any real interaction except for an acknowledging wave from a distance, we walked past the hut and on to an area called Sederhoutskop, where we set up camp with a view of Tafelberg peak, and a fiery Cederberg sunset to see us into the night. 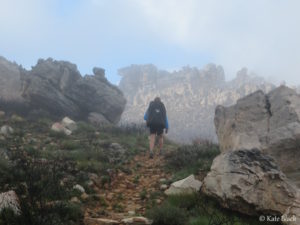 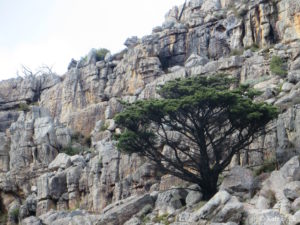 Day 4: Up Tafelberg and on to the Wolfberg Arch

One of our toughest days – mainly because we had no idea how steep the climb up Tafelberg peak would be! Tafelberg, also known as Ketelberg (due to a spout-like extension on its one side) is the second highest peak in the Cederberg and had been on our list to summit. It’s spectacular steep sides were incredible to see up close, and a scramble up a rockfall into the side of the mountain made it all the more adventurous.

Once conquered, we continued on our faithful jeep track, until we reached Gabriel’s Pass, where we stopped and had some lunch before tackling the kloof itself.

At the end of the day’s long haul lay the spectacular Wolfberg Arch, which we reached just as the sun was setting. The familiarity of a spot we’d visited before – and the sheer beauty and spirituality of the place – made us reflect on what an unusual and incredible four days we had experienced. 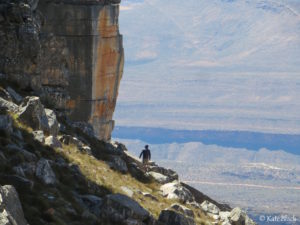 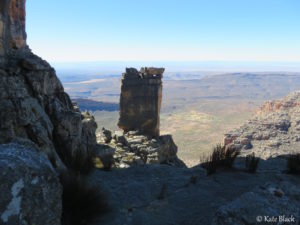 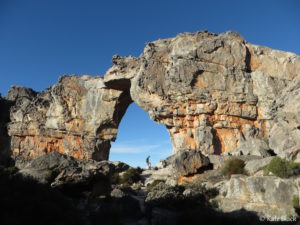 Day 5: Through the Wolfberg Cracks to Sanddrif

Knowing we were coming to the end of our adventure, we made the flat walk from the Arch across to the Wolfberg Cracks. We missioned down the open cracks until Sanddrif came into view, tiny blocks of white in the valley below. It was here that we had that strange feeling of, on the one hand wanting to rush down for a cold beer, and on the other, wanting to prolong the isolation. Eventually, the cold beer won out and we made our final descent to Sanddrif cottages, where we were met by family.

To spend a good chunk of time in the fascinating and prehistoric landscapes of the Cederberg, out of society’s way, is underestimated. John Muir was right when he said ‘of all the paths you take in life, make sure some of them are dirt.’ 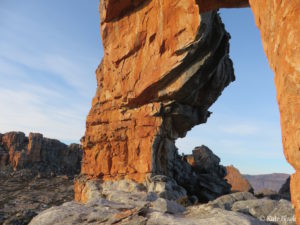 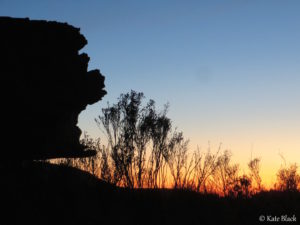 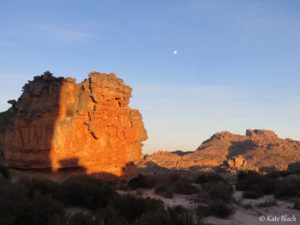 To find out more about hiking in the Cederberg, visit: www.cederberg.co.za

NOTE: Hiking in the Cederberg Wilderness Area requires permits (to be purchased through Cape Nature). Routes are self-supported and should not be attempted without prior hiking experience. 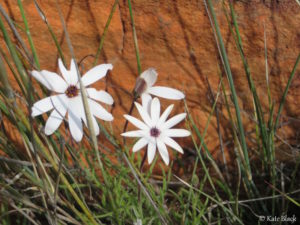 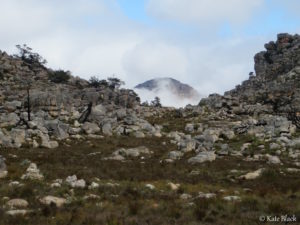 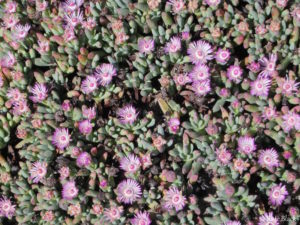 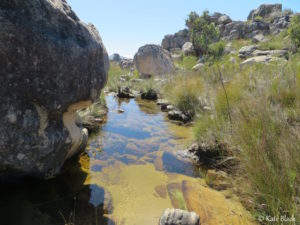 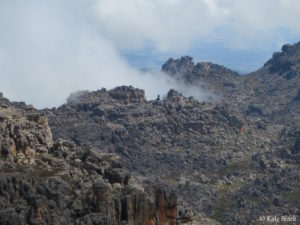 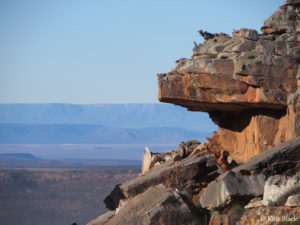 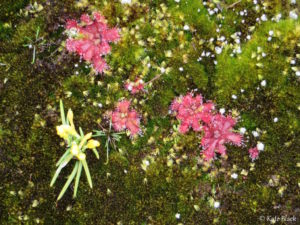 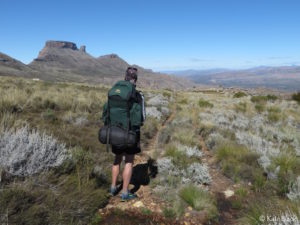