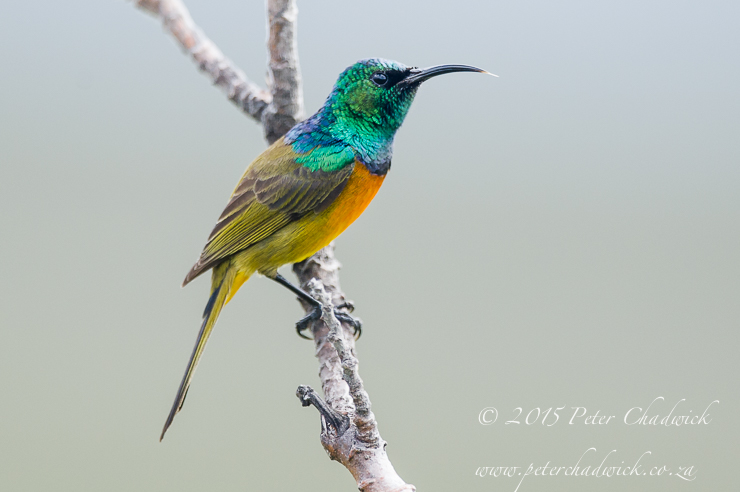 Measuring in at only around 15cms in length the Orange-Breasted Sunbird has to be one of the Cape Floristic Kingdom’s most attractive endemic species. The male’s spectacular coloration of metal-green head and neck, blue collar and orange belly make it unmistakable, while the female is a much drabber olive-green in color. It is mainly found in dense stands of proteas and ericas with some altitudinal migration taking place between summer and winter.

Outside of the breeding season, the Orange-Breasted Sunbird may be found in loose flocks of up to 100 birds that congregate around rich food sources. It will bathe in the dew of leaves and will drink water from shallow pools on a regular basis. Mainly feeding on nectar, it also favors spiders and small insects that are frequently hawked from the air. It is a monogamous breeder, with the male being highly territorial, chasing off not only those of the same species but also other sunbirds and birds as large as the Cape-Robin Chat. The densely packed, oval-shaped nest is built by the female and comprises of small dry twiglets, heather and soft vegetable fluff. One to two pale greenish eggs with greyish-brown spots are laid and take 13 to 16 days to hatch and are incubated only by the female. The chicks remain in the nest for around 17 days. The spread of alien invasive plants is reducing the distribution and density of this species.