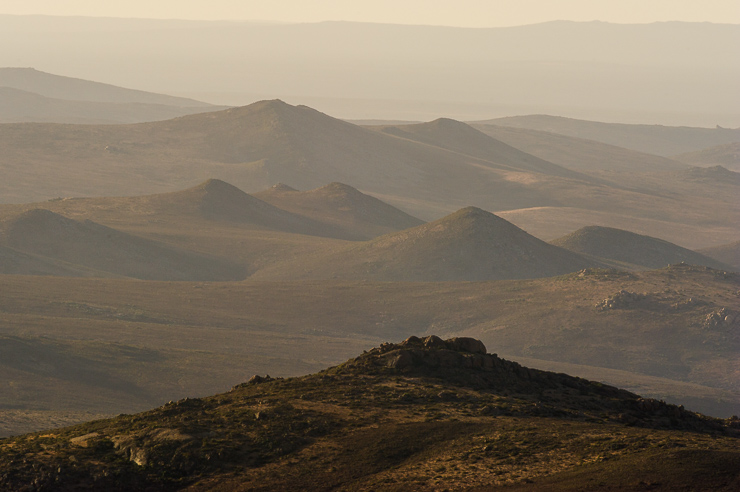 Fields splashed with floral diversity and colours are ubiquitous with the Namaqua National Park, but this special gem of a biodiversity hotspot has so much more to offer! It lies within the heart of the succulent Karoo and is home to 134 vegetation types of which about 40% are endemic. Gradients change from the rugged yet picturesque coastline through to rolling hills and steep sided valleys. Current tourism facilities include the coastal 4×4 trail, the Caracal Eco-route, numerous camping sites along the coastline and four self-catering cottages that may be booked through SANParks central reservations.

The coastal section of the park lies between the Groen and Sproeg Rivers where numerous small bays, boulder outcrops and long white beaches dot the landscape.  The endemic Heaviside’s Dolphins play and leap amongst the breaking waves and there is also a breeding colony of Cape Fur Seals that is one of the few colonies protected within the boundaries of a national park. Driving inland from the coast there are large open flat lands where Gemsbok, Red Hartebeest and Steenbok may be viewed together with shier Suricates and Grey Duikers. Further to the east, rolling hillsides and valleys add to the diverse scenery and these are home to Klipspringers, Chacma Baboons and Rock Hyraxes. Jackal Buzzards and Verraux’s Eagles rule the skies and tangle in aerial fights with one another and with the smaller Rock Kestrels and White Necked Ravens. In springtime, fields of colorful flowers occur right up to the edge of the beach while limpet beds of various species provide the world’s densest concentrations of grazers.  All of this and so much more makes the Namaqua National Park a well-worthwhile holiday destination at any time of the year

The climate is temperate with low winter rainfall, mild days and coastal winds. Evenings can be cold. Sunblock and warm clothing are both essentials. The best time to view the flowers is during the months of July to September.

The Namaqua National Park is 21kms west of the Northern Cape town of Kamieskroon that lies on the N7 north of Cape Town.