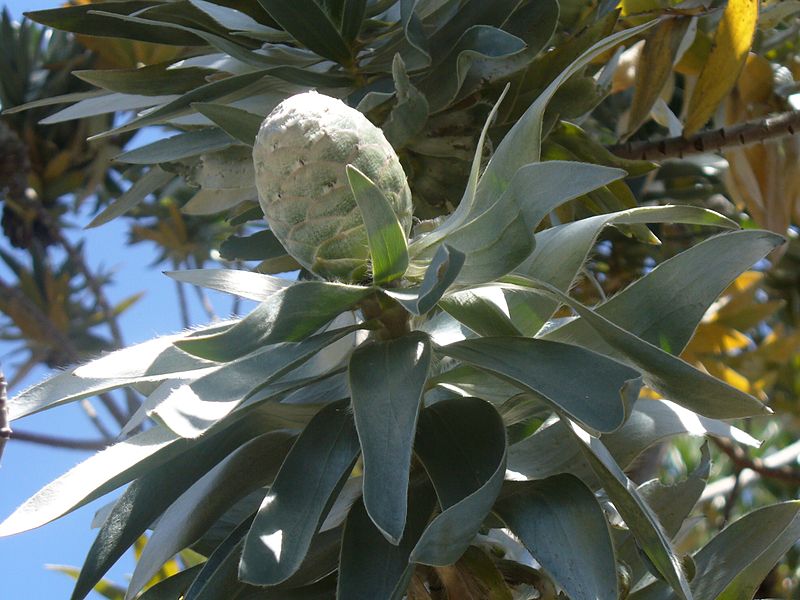 Leucadendron: a rather serious-sounding title for this lively fynbos shrub that we see dotted across the mountain in a rainbow of different hues. Its common name ‘conebush’ sounds quite ordinary too, but species like silver tree, spinning top, golden sunshine and silky-ruff begin to paint a more accurate picture of how diverse and superb this plant can be.

It’s not surprising that Leucadendrons belong to the Protea (Proteaceae) family. Their overall appearance and the way in which their leaves are arranged make them look much like sugar-bush proteas at a glance, but on closer inspection you’ll find they are missing that goblet-shaped Protea head we know so well.

So which is the Leucadendron then? One very striking species you may have come across in Kirstenbosch or on Table Mountain is the Silver Tree (Leucadendron argenteum); the tall, emerald-green, leafy tree, known for the silvery-white sheen it adopts when tiny hairs on its leaves catch the sunlight (1). Another one that may ring bells for mountain explorers is the Golden conebush (Leucadendron laureolum), which turns Cape mountainsides bright yellow in winter. What we see as a mass of yellow ‘flowers’ erupting on the slope is really the plant’s bright, yellow-green involucral (modified) leaves. These conceal the flower-heads, which themselves are packed with numerous tiny flowers (2).

We could go on and on with the list of familiar favourites, as Southern Africa has 82 Leucadendron species, ranging from bright yellow to deep crimson. Instead, here are one or two simple things to look out for:

For some useful visual clues, have a look at the Leucadendron species list here.