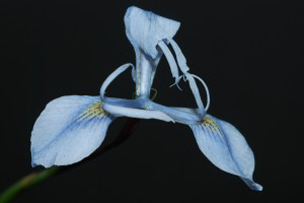 After nearly a decade of going unnoticed the delicate blue iris flowering along the Saldahna Coast in the Western Cape, will finally be named. This comes after a four month long online auction which saw the highest bidder given the opportunity to name this delicate flower.

Since December 2010, the Table Mountain Fund (TMF) and Strauss & Co have managed the campaign which has received international media attention. London newspapers even recommended that naming the iris after Kate Middleton would be an ideal gift from Prince William to his soon to be bride.

In the end, Mike and Rose Hainebach from Cape Town were given the honours of naming the flower that only blooms in August. They outbid everyone on the evening with the offer of R550 000, to officially name the flower after whomever they chose.

The funding raised will go towards the Fynbos Land Protection Campaign which is aimed at connecting and expanding the remaining pristine areas of the Cape Floral Kingdom to create a network of natural corridors across the landscape, reclaiming the Cape’s scenic beauty and providing space for people, ecosystems and wildlife to thrive.

“Funds raised through the auction will be used by TMF to purchase land and to secure land with landowners to ensure that the biodiversity on their land is protected forever. The auction was an innovative way of raising money to buy land and protect it,” says TMF Manager, Onno Huyser.