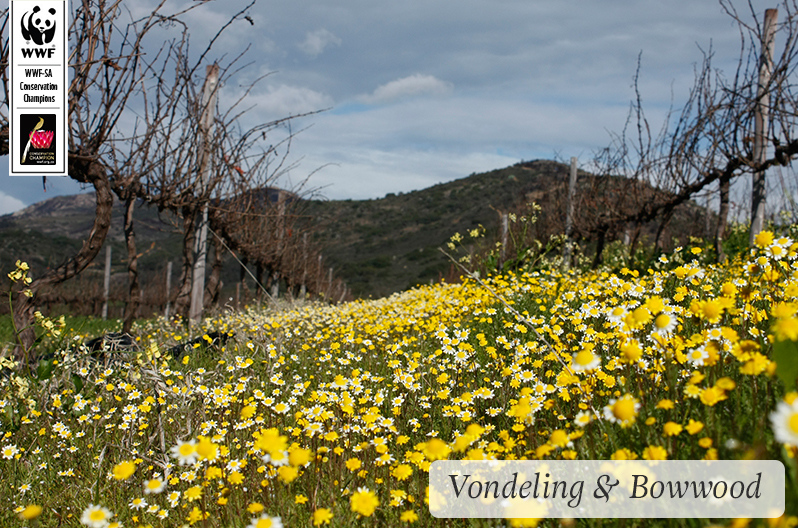 Yesterday’s delicious Rooibos #FynbosFlavours were paired with the creamy and environmentally friendly Vondeling Chardonnay. As a WWF Conservation Champion Vondeling, and its sister estate Bowwood, are following an impressive and noteworthy environmentally sensitive approach to farming. With 200 ha of their 654 ha farm under conservation, these two estates are certainly leading the way in sustainable wine production. Situated between Paarl and the Swartland, the conserved land includes the endangered Boland Granite Fynbos.

In 2001 Vondeling co-funded the Paardeberg Sustainability Initiative (PSI), in recognition of threats to the biodiversity and natural resources of the Paardeberg, a privately-owned mountain in the Western Cape. Following a fire on the Paardeberg in January 2011, a botanical survey, was commissioned by the PSI and to date, over 1000 species in over 70 families have been collected, with approximately 10% of these species being listed as threatened. The collection is housed in a field herbarium on Vondeling, with a duplicate collection stored in the Compton Herbarium at Kirstenbosch. To highlight the plight of these threatened species Vondeling has named their signature re and white wines after two of these species, namely Babiana noctiflora and Erica hippurus.

With environmental sustainability being top of mind at this three-centuries-old wine estate, Vondeling wines definitely make for a wonderful #GreenChristmas gift idea and addition to your festive season table. #FabulousFynbosWines