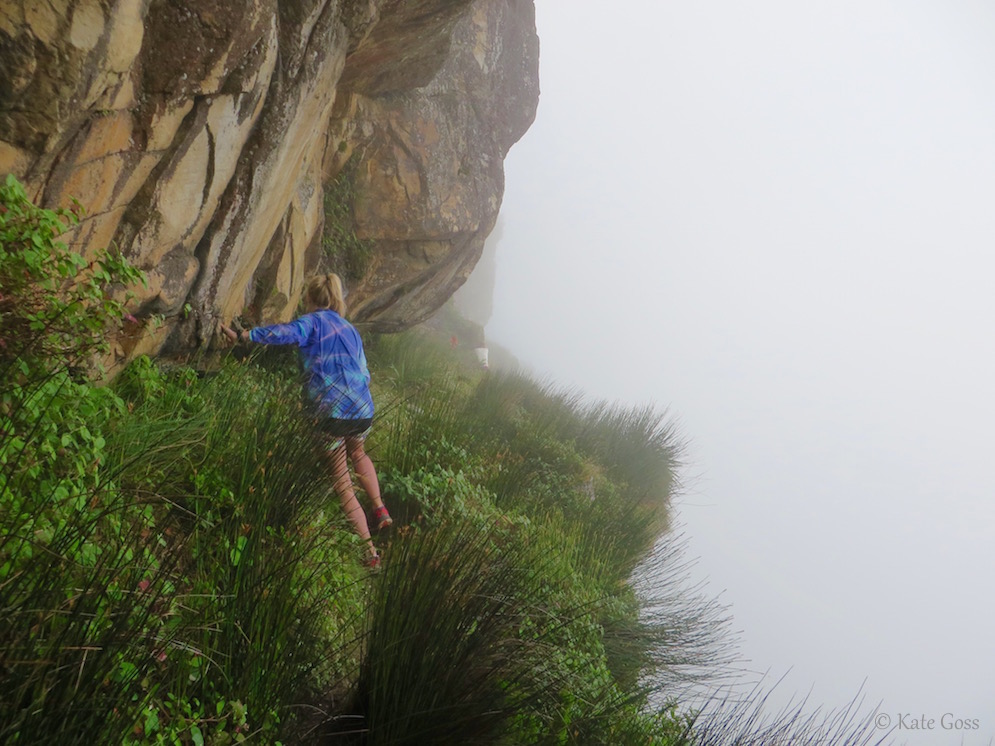 On considering whether to attempt Table Mountain’s notorious Carrel’s Ledge, a quick Google search revealed a collection of blogs that described the traverse as awesome, breathtaking, extremely exposed, challenging, crazy, terrifying and exhilarating.

Naturally, it had to be done.

We chose a hot, December day for our mission, prompting us to delay our ascent until the early afternoon. Ascending via Skeleton Gorge, one of our favourite routes with its leafy, forest canopy, trickling mountain springs, lush fern beds and emerald mossy banks, we reached the infamous Smuts Track on top of the mountain within about an hour.

Turning right onto Smuts Track in the direction of Maclear’s Beacon, we walked across the undulating ‘table top’, cresting 3 or 4 rocky buttresses and meandering across a set of wooden boardwalks, before finding a small cairn, and a path to the right that would lead us to our challenge.

As the afternoon progressed, the mountain’s infamous ‘table cloth’ had begun to push in and the view out to the Cape’s Northern Suburbs was almost entirely ‘greyed out’ with cloud.  Our sense of adventure not deterred, we decided to investigate whether the Ledge was still passable.

What we found at the end of the right path was one of Table Mountain’s more spectacular features: Ascension Ravine. This pristine, emerald gorge stretches deep down into the side of the mountain, with steep, rocky cliff faces enfolding the lush vegetation of Newland’s Forest below. The encroaching cloud mist made it all the more impressive.

Gingerly at first, we followed the narrow path around the mouth of the ravine and onto Carrel’s Ledge. With a sheer rock face stretching upwards on one side and a vertical drop into the deep ravine on the other, there was little margin for error and we tackled each section carefully, holding onto deep-rooted shrubs and Restios for reassurance.

Every so often the cloud would lift momentarily, yanking the false sense of security from beneath us and exposing the mammoth drop below – cause for those giddy stomachs we had been preparing ourselves for.  But perhaps the most daunting section of all was a very exposed ‘bear hug’ creep around a large, protruding rock, with a mere 30cm ledge to place one’s feet on.

As the ledge came to an end, we made our way around to Maclear’s Beacon feeling relieved and excited at having tackled one of Table Mountain’s most exhilarating sections. There’s no doubt we’ll be back to tackle it again – next time on a clear day, where those giddy stomachs last for the duration.

Opened by Italian mountaineer Jean-Antoine Carrel (d. 1890), Carrel’s Ledge is a traverse found just below the summit along the eastern edge of Table Mountain. It takes about 20 minutes to walk across, and emerges a short distance from Maclear’s Beacon, overlooking Devil’s Peak and Table Bay below.