Arangieskop: A snowy summit of ‘The Everest of the Western Cape’ 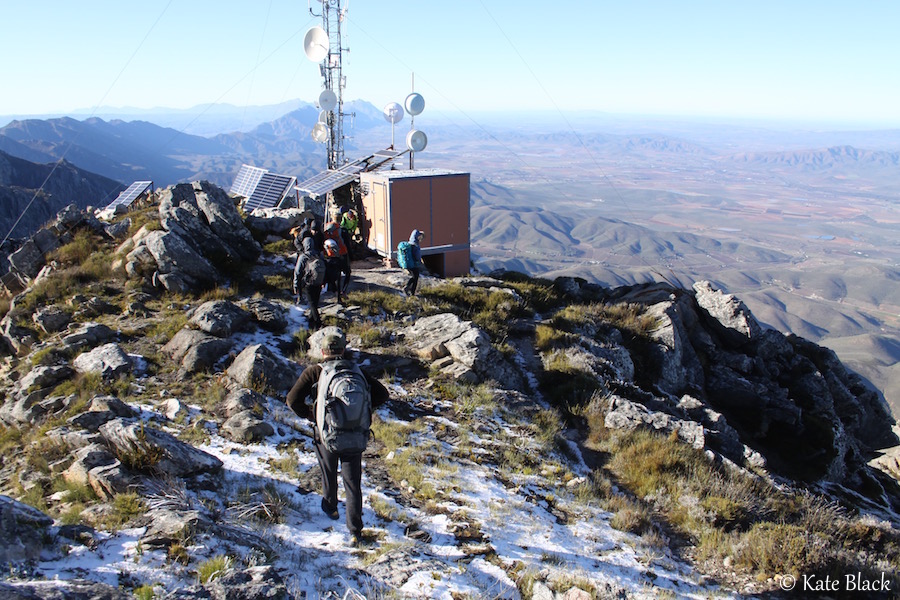 September 2, 2016 In Hike the Cape, Hike.Run.Explore By Kate Black

Arangieskop: A snowy summit of ‘The Everest of the Western Cape’

South Africans have an unfaltering obsession with snow. We’re never prepared for the cold that comes with it – but that’s no deterrent, and the allure of the white stuff generally tempts even the least likely of locals into an outdoor exploratory mission of sorts.

The snow that was predicted for the Arangieskop peak on the 1st July this year was one of a few factors that lured us up the mountainside to a hiker’s cabin for the weekend. Though we had booked the hut months in advance, the Western Cape foul weather warnings in the week’s lead up amplified our excitement as we imagined potential snowfall and a cosy night in a remote stone hideout.

The hike began early on Saturday morning, 6km’s outside of Robertson in the Dassieshoek Nature Reserve. With frosty grass and steam rising off the little dam, we set off – gloves and beanies firmly on – ready to tackle the great Arangies. According to various Cape hiking guide accounts, we were preparing ourselves for ‘The Kilimanjaro of the Western Cape,’ ‘the Mother and Father of all trails in the Cape,’ and the one that provoked the most group banter, ‘The Everest of the Western Cape.’

The path started out weaving its way through the reserve, slowly gathering height and providing beautiful views over the Robertson Valley. Proteas were in full bloom and the sun was shining, though there was an icy wind channeling down the mountainside and we were excited for what was to come. As we began the steeper part of the ascent around the side of the looming great Arangieskop peak, we started to crunch on our first smatterings of snow – shady patches that had not yet been caught and melted by the sun.

Day one’s uphill climb is not for sissies; it covers about 8.5km with an elevation gain of around 1300m. So after about five or six hours of walking when we felt ourselves beginning to creep over the top of a ridge, the group’s pace quickened with the thought of an indoor lunch and a warm afternoon out the wind. Not long after, a narrow jeep track, both tracks white with remnants of snow, led the way over the rise, revealing the most breathtaking view over the Koo Valley: tiny blocks of farmland, dams and dirt tracks, and majestic mountain range backdrops in every direction. As anticipated, the hut was just over the ridge, boasting the same spectacular view. With clear blue skies, an icy breeze and mountain and valley landscape panoramas, the whole scene felt distinctly alpine – and the little stone cabin that awaited us only added to the charm.

By hiking hut standards, we had found ourselves in the lap of luxury. Electricity, a large wood fireplace with a generous wood pile, and a donkey for hot showers were little pieces of bliss after a hard morning’s hike. Equally as contenting was the warm and sunny living area, built into the rock face with big windows to let the sunshine stream in and show off the view. The thermometer declared our outside temperature 3 degrees Celsius and falling, and we donned every layer we had for an outside evening sundowner over the valley.

The next morning, we were eager for our ascent of the ‘kop’ itself. As we left the hut, the snowy breeze was brisker than ever and we were excited to discover a couple of frozen pools as we walked. 212m up and a steep set of switchbacks later, we had summited Arangieskop at 1695m above sea level! Another clear day made for crisp views in every direction, and we spent some time ‘breathing in’ the views and signing the quirky ‘visitor’s book’ that’s hidden in a steel tin on top.

When the time came to descend, the path led us onto the shady side of the mountain, making for an interesting, snow-covered descent. Clambering gingerly so as not to slip on the snow, we made our way off the top ridge and into a steep gorge which would continue leading us down the mountain. Still starved of sunlight, the rocky path was iced over in many places, and we had to lower ourselves down each step with real concentration. Fortunately, we managed to avoid any bruises or breaks!

After a steep and lengthy descent, we felt the change in air temperature and vegetation as we moved to the lower mountain slopes. Though we could see our starting point in the distance, this was no indication of what was to come, for the trail led us up, down and around a few more ravines and contours before we were eventually on the straight and narrow route home. 10km and close to a cumulative 1600m elevation loss later, the legs were undisputedly shaky by the time we had come full circle.

Snow, sun and the mother of all mountain huts – one can’t imagine a better winter weekend.