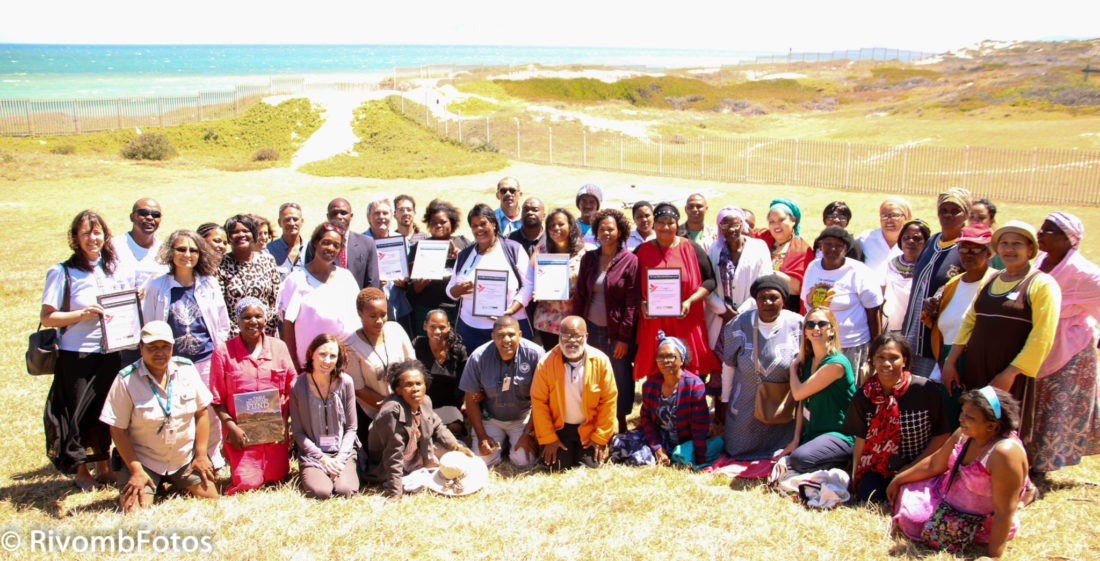 On 1 December 2016, the Monwabisi Resort in Mitchell’s Plain was abuzz as participants and partners turned up to attend the celebratory close out event of the Cape Flats Nature Partners’ Fund (CFNPF).  Despite the busy time of the month the event saw a turnout of more than 40 attendees from various communities on the Cape Flats including: Khayelitsha, Mitchell’s Plain, Hanover Park and Delft, to mention a few. All were dressed up to the nines to celebrate their respective, and their collective, achievements.

The purpose of the CFNPF celebratory close out event was firstly to acknowledge, celebrate and award the grant recipients for the inspiring and amazing contributions they made in their respective communities on the Cape Flats.  Secondly to create a platform where the various CFNPF small grant projects, funded by the Table Mountain Fund (TMF), can network with, learn from, and inspire each other to dream big and achieve more within their respective communities.  Another purpose of the gathering was to acknowledge and recognise the support provided by various partners who contributed to the successful implementation of the CFNPF small grant projects, such as the local Nature Conservators based at the City of Cape Town (CoCT) Nature Reserves on the Cape Flats.  18 innovative small grant projects were funded through the CFNPF that focused on recycling and up-cycling of waste, food, healing and medicinal gardens, cleaning and management of the wetland, to mention a few.

The Cape Flats Nature Partners’ Fund is a three year small grant that was launched in the last quarter of 2013 by TMF in partnership South African National Biodiversity Institute (SANBI).  A small grant was disbursed towards conservation projects that are innovative and spark conservation action. The CFNPF was funded by SANBI in order to support the continuation of local action that bridges the gap between conservation, social, economic and cultural sectors on the Cape Flats; and that catalyses’ partnerships and further resources for the communities.  The intention of the CFNPF was thus not just to award small grants for conservation projects, but to also build the capacity of community members to engage with the CFNPF and other calls for project proposals.

The celebratory close out event concluded with TMF manager, Kerry Maree, and Jerome September, from the CoCT Nature Conservation, awarding the grant recipients for their respective contributions to looking after our natural areas on the Cape Flats.  Maree and Boitshekwane Kgantsi also gave a special word of thanks to the various partners, who supported the successful implementation of the CFNPF in the respective communities.  These partners include Jerome September from Macassar/Wolfgat Nature Reserve, a local community champion, Dale Isaacs, Tanya Layne and Marilyn Martin-Vermaak from SANBI, Thabo Lusithi from Environmental Monitoring Group, Mark Arendse Clive from Zandvlei Nature Reserve and Vuyolwethu Flepu from the CoCT.

Kgantsi, TMF’s Small Grants Project Officer said, “It has been amazing to see how catalytic the  CFNPF has been in the communities and in the lives of the individuals involved in the projects.  The relationships and connections that were made during the implementation of these projects are priceless”.