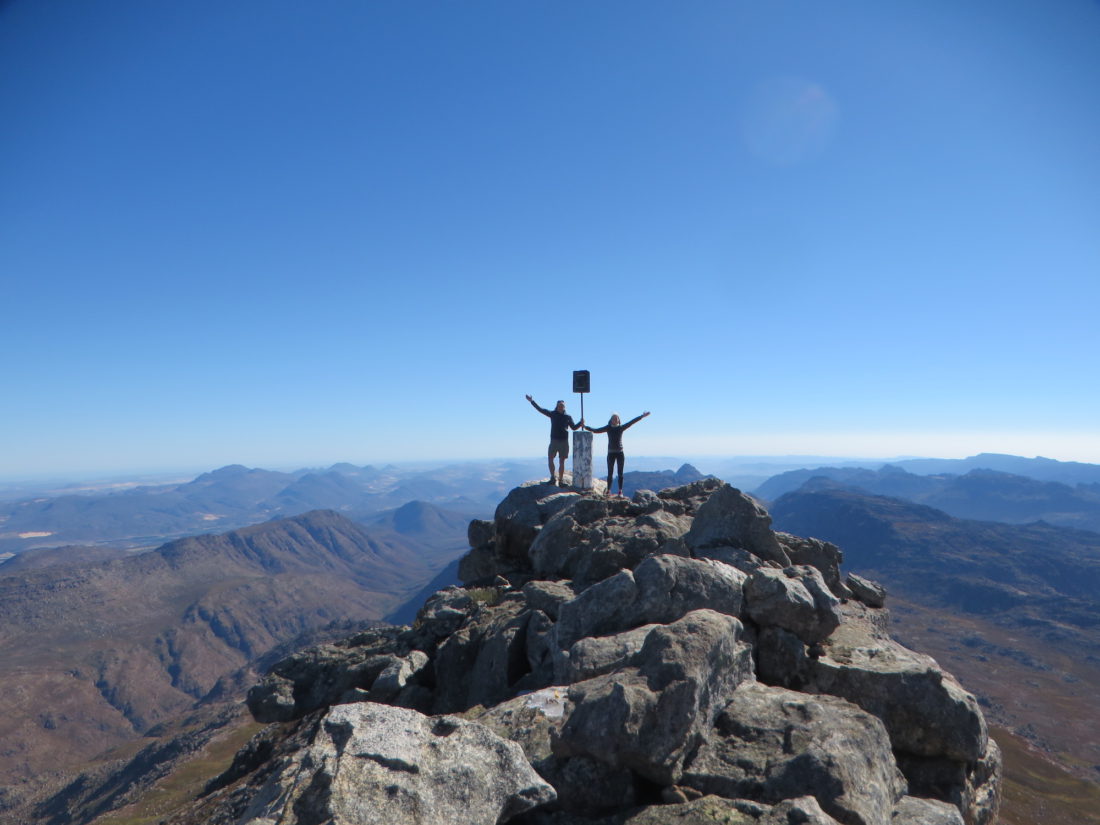 All the familiar landmarks came into focus: a miniature Wolfberg Arch; a tiny Maltese Cross; the peaks of Tafelberg and Sneeukop, sitting below us for a change. From Krakadouw to the north, to the Groot Winterhoek and Matroosberg mountains further south, the bird’s-eye-view below us mapped out all of our previous Cederberg adventures, making them look, well, rather small.

We were lucky to find ourselves on top of the highest peak in the Cederberg on one of the most beautiful, blue-sky days we could have hoped for. This is not to say that it was warm; we were able to serve our summit snacks (a gourmet hiker’s selection of salami sticks, dried fruit and energy bars) on a thick platter of ice, extracted from a puddle on top.

Just the day before, we had set off from a rainy Cape Town, arriving at Algeria (where we would get our permits) in the drizzle. Willing the weather to clear, we dropped a car at the Dwarsrivier car park near Sanddrif, and drove back to start of the Duiwelsgat trail, off Uitkyk Pass, where we would begin our mission.

The magical Duiwelsgat trail meanders up a lush valley, with proteas carpeting the mountainside and the Uitkykrivier babbling down the middle. It’s mostly an uphill puff, until you reach the crest of the spectacular Duiwelsgatkloof – perfect for a snack, lunch or tea break to soak up the view. After this, the path contours along a lush, forested section with spectacular scenes from one cliff-side to another, before climbing again – this time onto a grassy plateau which eventually leads to Sneeuberg Hut.

The Hut was our destination for the evening. Though we were all carrying tents, our goal was to cover the distance to the refuge on the first day, so that our summit was within reach the following morning. Arriving at sundown, tents were pitched in record time, and socks, gloves and beanies emerged with gusto as the weather turned ‘crisp and clear’. We tucked ourselves in under a starry sky, near-full moon, and a silhouette of the mighty Sneeuberg. There was not a sound.

The following morning was a slow one as we waited for the sun to thaw the icy dew on our tents. We plied ourselves with tea, rusks and hot oats before hitting the trail with purpose – and we soon came upon the right turn that would lead us up the peak. Leaving our overnight packs at the base, we tackled the steep switchbacks towards the saddle. It was rather warm by now, and the icy stream gushing down the gorge made for a couple of welcome water-breaks. We climbed onwards and upwards until we reached the saddle, where we found the first ice-covered puddles, frozen waterfalls and traces of snow.

It was at this point that it dawned on us to keep an eye out for the magnificent Snow Protea (Protea cryophila) – one of the world’s rarest plants! These endemic plants have huge, snowy-white flowers (the size of a King Protea) and are found on peaks above or near the snow line. At 2027m, the Sneeuberg summit is said to be one of its very few homes.1

The final 20 minutes of ascent could be described as gnarly, with narrow ledges needing some ‘don’t-look-down’ shimmying, and a few awkward chimneys to test one’s flexibility. Had it not been for the odd red marker that guided us (even when we weren’t convinced), we mightn’t have conquered the beast. But we made sure we reached that summit, and we took time to breathe it in. Unfortunately no Snow Proteas in the bag, but the feeling of being surrounded by 360 degrees of wild Cederberg (while picking energy bars off an ice platter) had us grinning all the way home.

Note: All overnight hiking permits must be obtained from CapeNature (bookings office in Cape Town or Algeria office).