All the small things: The rare Geometric Tortoise 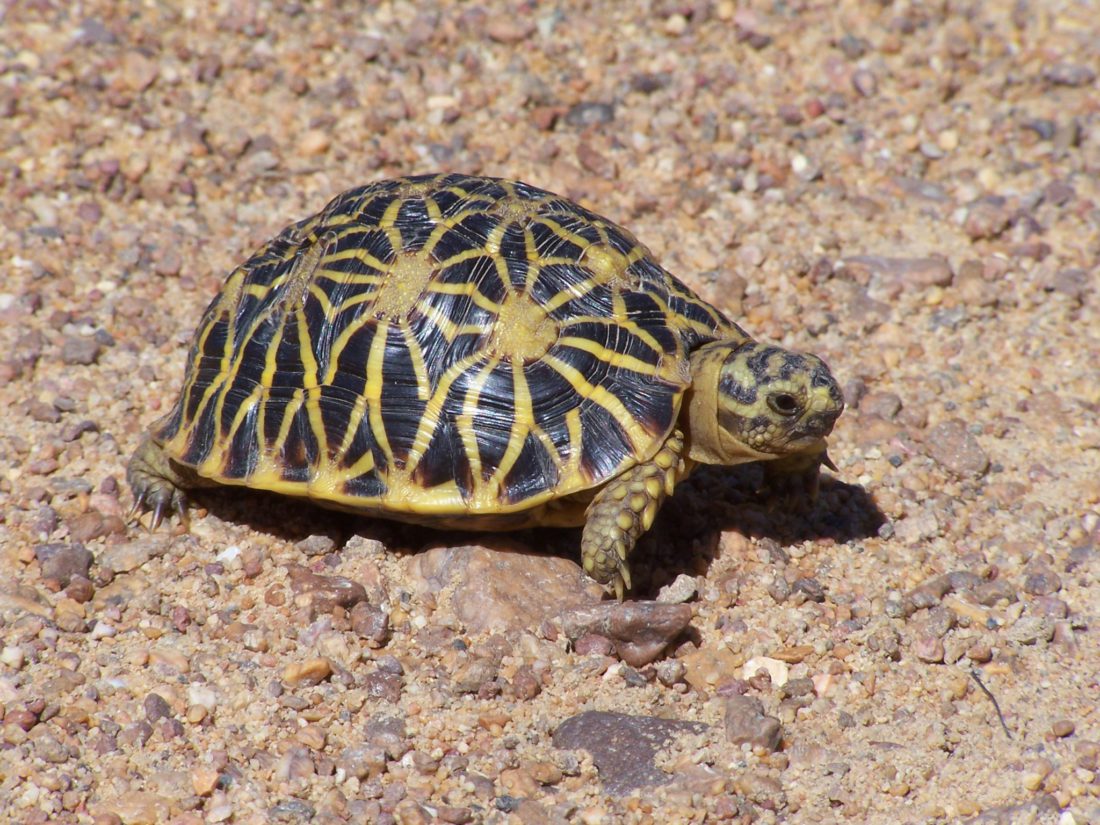 All the small things: The rare Geometric Tortoise

The humble tortoise. A peculiar, prehistoric creature with ancient origins dating back 260 million years. Originally a ‘fat lizard’, whose ribs broadened out and eventually united to form a complete shell, the tortoise we know today uses its suit of armour as a potent form of defence.1 But there are a few things that these hardy reptiles battle to withstand; and one of them is the influence of man.

The rare Geometric Tortoise is one of the Western Cape’s most precious endemic and critically endangered species. In fact, it is one of the top 25 most endangered tortoises and turtles in the world.2

A compact bundle that could virtually fit the palm of your hand, the tiny tortoise reaches only 10-12cm when fully grown. Its perfectly designed shell is a marvel, exquisitely patterned with radial streaks of egg-yolk yellow and black.3 Very shy and rarely seen, many are unaware that this beautiful little tortoise exists – let alone that it is teetering on the brink of extinction.

Why is this so? Put simply, these tortoises have been left without much of a home. In recent years, more than 90% of their habitat has been destroyed, with the growing spread of commercial agriculture and urban development. While the habitat they rely on – shale renosterveld and alluvium fynbos – previously existed in abundance in the Swartland, Upper Breede River Valley and Ceres Valley, today it has been reduced to small, isolated pockets, dramatically threatening the livelihoods of the species it supports.4

Adding to this massive challenge is the increasing presence of alien vegetation, predators such as baboons and feral pigs, poaching for the illegal pet trade, drought and too frequent veld fires (both accentuated by the growing effects of climate change). All of these factors combined have the power to devastate population numbers quickly and irreversibly, as was the case when a large fire swept through the Elandsberg Nature Reserve in 2012 with catastrophic effect.5

While it is extremely difficult to get concrete evidence on how many of these elusive creatures currently exist, we do know that the Geometric Tortoise population is tiny. In 2002, Cape Nature estimated the population at 3000 individuals, but today it is likely that there may by less than 1000 tortoises left in the wild.6

Considering the dire situation this species finds itself in, the future is not without some rays of hope. In recent years, CapeNature and other organisations have worked diligently at profiling and protecting the species. Stewardship Programmes are in place to conserve the small remnants of the tortoises’ precious habitat as well as to create new preserved tracts of land, and breeding programmes are underway to increase the survival rate of hatchlings, before releasing them into the wild.7

It is often our smaller species that act as key flags for changing environmental conditions – and the Geometric Tortoise is a strong case in point. In this instance, our environment has changed so dramatically that we are at high risk of losing an entire species. Importantly, there could be other inconspicuous, less-studied organisms that face a similar fate. We need to ensure that we are looking at our ecosystems holistically, taking care to understand how organisms at every level – no matter how large or small – contribute to the bigger puzzle that is our province and country’s rich biodiversity.8