All the small things: The long-tongued fly 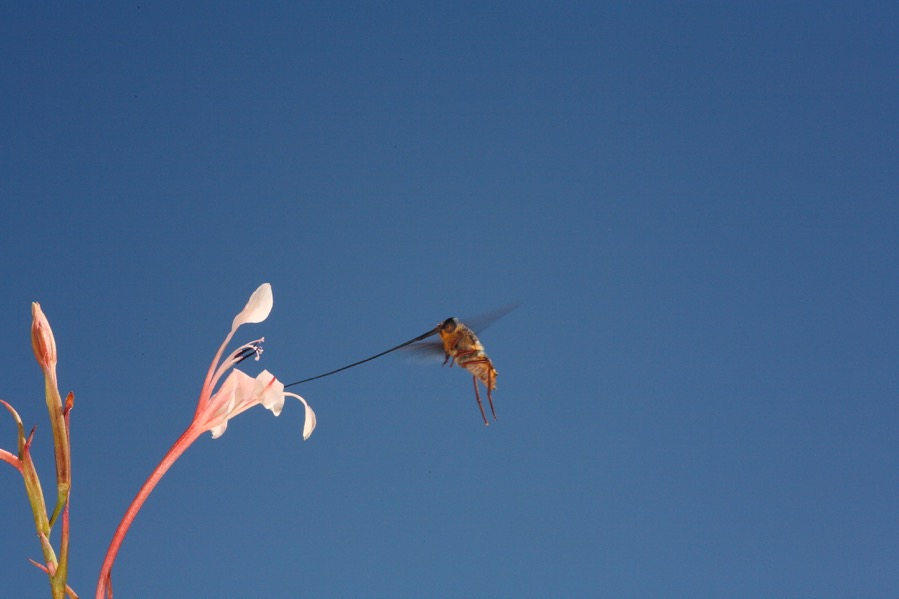 September 29, 2016 In All the small things, Icons of the CFK, Introductory Series By Kate Black

All the small things: The long-tongued fly

Flies are such tiny creatures – at a glance, just wings and eyes. Yet these seemingly simple insects are among the most important pollinators on the planet. As they have evolved to fulfil this fundamental role in ecosystems across the globe, many species have adapted in ways more clever and complex than you would imagine.

The long-tongued fly is a brilliant local example – and arguably one of Southern Africa’s most intriguing insects. Boasting a ‘tongue,’ known technically as a ‘proboscis,’ which extends up to five times its body length, this peculiar-looking animal is designed to pollinate a select guild of plants with elongated floral tubes (Iridaceae and Geraniaceae to name a few) (1).

It takes pride of place in our Table Mountain Fund logo, and these are some of the reasons why:
There are 15 species of long-proboscid flies, split between two families Nemestrinidae and Tabanidae, 14 of which are found in Southern Africa (South Africa, Namibia, Swaziland and Lesotho) – and one in the Himalayas. While these flies are commonly 15-24mm in body length, their mouthparts are often as long as, or much longer than, their bodies. An extraordinary example is the Moegistorhynchus longirostris, found along the Cape West Coast, with a proboscis that extends to up to 100mm long (2). As the proboscis is not retractable, when it’s not being used for nectar consumption it becomes a strange-looking appendage that folds back under the insect’s body and trails far behind it during flight.

So how does this remarkable insect carry out its all-important goal of pollinating floral species so that they continue to thrive? Interestingly, this service is no more than a side-effect of what the fly does best: foraging for nectar. When it lands on a flower and stretches its proboscis deep into the floral tube in search of something sweet, it brushes against the reproductive anthers of the flower, passively accumulating pollen on its body, which it then transfers to the stigmas of other flowers of the same species (3).

Is the flawless suitability of these long-proboscid pollinators to long-tubed flora a coincidence? Not in the slightest. The long-tongued fly and the plants it pollinates have co-evolved over years and years, adapting iteratively in an ongoing process of natural selection. A long floral tube is a benefit for pollination, as it ensures that insects have to stretch deeply into the plant to access nectar, which guarantees pressure on the plant’s reproductive parts and a brush of pollen to the insect’s body. Flies with longer probosces, however, are also favoured by natural selection. So the two species continue to evolve in a cyclical process, lengthening to meet the requirements of their co-evolutionary partners, to the eventual extent that less specialized organisms are excluded from the ability to pollinate these flowers (4).

The elaborate specialization of long-tongued flies, and the high numbers of plants that depend on them for survival, make them a keystone species in the Greater Cape Floristic Region. Without them, the ecosystem would be dramatically different, or perhaps cease to exist altogether (5). Habitat fragmentation due to agriculture and urbanization is a key threat to the sustainability of the species (6); and the importance of conserving them, like so many of our other ‘small’ species, is not to be underestimated.
Nature’s incredible intricacy and interdependence calls for exploration with a fine tooth comb. Only once one starts tipping rocks for skinks and earthworms and peering into plants for bees and beetles, does one start to graze the very tip of the iceberg; to get a tiny taste of the overwhelming scale, complexity and immense richness of our Cape Floristic Region.