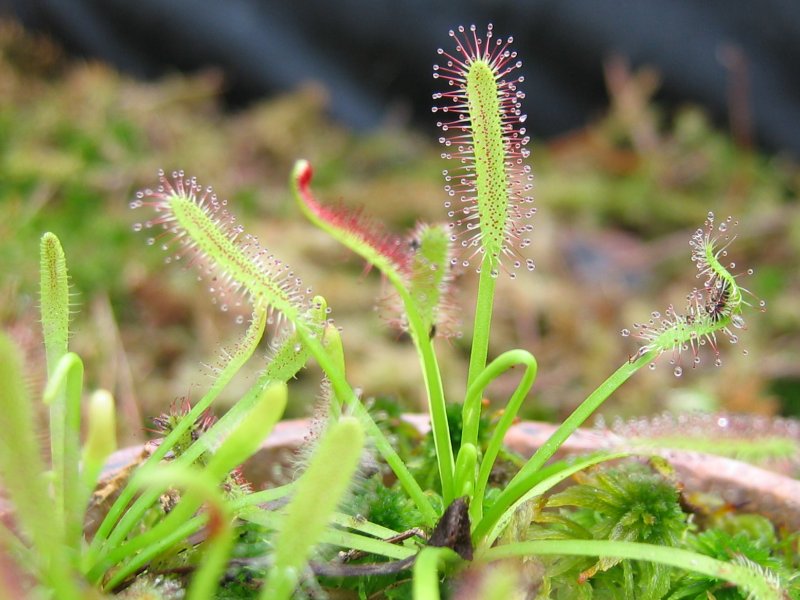 One tends to imagine carnivorous plants growing in the shadowy depths of the Amazon rainforest or other exotic places across the planet. Who would have thought that we have our very own plant predators right here on Table Mountain?

Drosera plants, commonly known as ‘sundews’, make up one of the world’s largest genera of carnivorous plants (1). There are 18 species of Drosera found in South Africa, some of which are endemic to the Cape, and even to the slopes of Table Mountain. These tiny red and green carnivorous plants take on a number of different shapes and forms, their genus ‘drosera’ derived from the Greek word ‘droseros’ meaning ‘dewy’, in reference to the tiny drops of fluid found on their tentacle-covered leaves (2).

The most fascinating thing about these plants is how they catch and digest their prey. Each plant is covered in numerous tiny tentacles, ending in a bulbous head made up of glandular cells. These glands secrete a glistening, sticky fluid that is used to trap prey. When an unsuspecting ant or other insect finds itself trapped by the sticky fluid, the Drosera’s sensitive tentacles detect the caught prey and produce more dew to further entrap the meal. So sensitive are its tentacles that they can differentiate between prey and other stimuli, such as a water droplet landing on its leaves (3).

Once the victim is entrapped, the sticky secretion contains acid and enzymes that begin to digest the prey. The leaf blades may even fold over for better absorption and to simultaneously suffocate larger prey. The Drosera uses insects to supplement the lack of mineral nutrition found in soil that they grow in: by digesting insects, the plant is able to gain the nutrients, particularly nitrogen, that it needs to survive (4).

Some of the distinct elements to keep an eye out for when trying to spot the Drosera include the unmistakable, glistening ‘dewdrops’ that form on the plant’s tiny glandular tentacles; a vivid red or green basal rosette, easily mistaken for a flower in the plant’s non-flowering months; and a flowering stalk, originating from the centre of the plant, often bearing purple, pink or white inflorescence (depending on the species).

Drosera like to have wet feet, and are most likely found on stream or river banks, and damp, exposed areas such as seeps or marshes (5). Some varieties to keep an eye out for on Table Mountain and across the Western Cape include the Drosera cuneifolia, (Peninsula Sundew), native to the Cape and found only near the Table Mountain Complex, Drosera capensis (Cape Sundew), Drosera aliciae (Alice Sundew) and Drosera trinervia (Small Sundew), amongst others.

Like most of the fauna and flora found on Table Mountain, there’s much more to these tiny plants than meets the untrained eye. As nature enthusiasts, it’s our job to keep exploring, discovering, questioning and learning about intriguing species like this, so that we can share the fun and fascination with others.