All the small things: In search of the arum lily frog 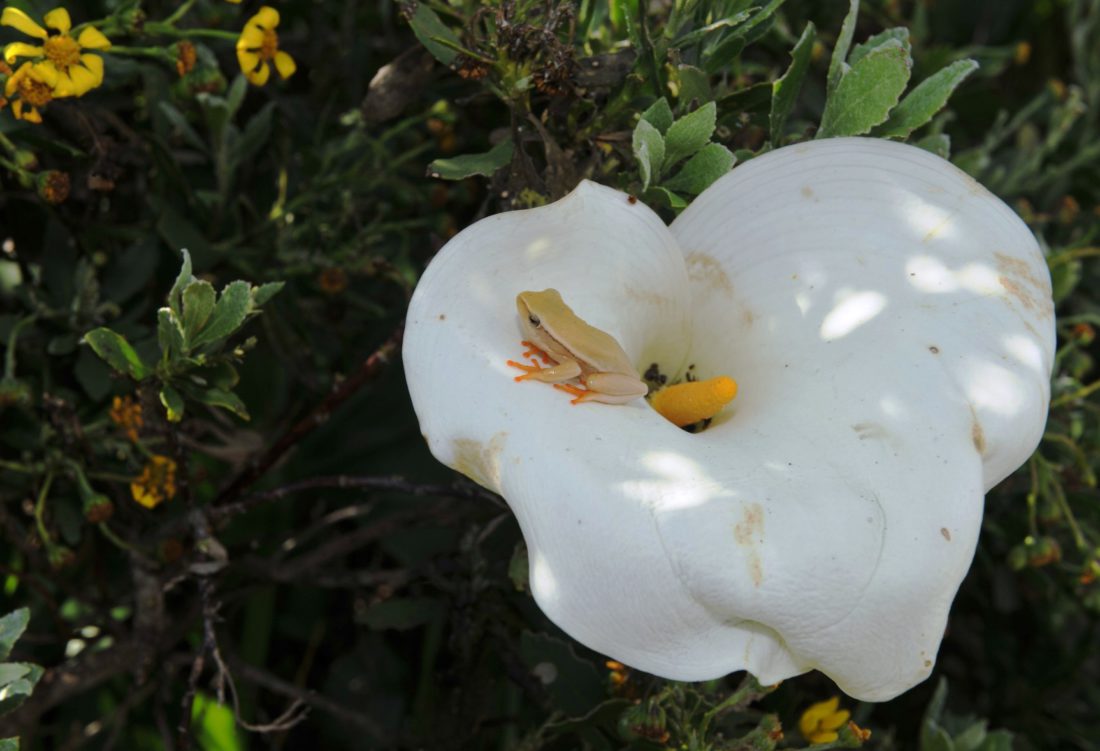 All the small things: In search of the arum lily frog

I’m in search of an arum lily frog. What could be more perfect than a tiny, buttercup-coloured amphibian curled up on the crisp, white spathe of an arum lily?

Arum lilies (Zantedeschia aethiopica) are some of the most unusual and spectacular flowers around (sadly, their pervasiveness means we often take them for granted) and I recently learned that, from time to time, they are joined by a small companion.

The arum lily frog (Hyperolius horstockii) has pale yellow/cream colouring, which means it often seeks white or pale surfaces as appropriate camouflage from predators. Often, the most suitable ‘hangout’ it can find is the white arum flower.

Endemic to the Western Cape, and a very small area of the Eastern Cape, arum lily frogs grow to about 40mm in length, breeding in wetlands, and occasionally using the well-known arum for shelter. They have a dark stripe running down their sides, and orange, sticky-looking webbed feet, which they tuck neatly underneath themselves when they’re trying to remain out of predator’s sight (1). Males are characterised by a dark yellow throat.

Frogs – and amphibians in general – are important bio-indicators. They make use of both terrestrial and aquatic environments during their life cycles, and as such, are sensitive to, and indicators of, change in both systems. This, coupled with their semi-permeable skin, makes them good indicators of ‘environmental health and the state of our biosphere as a whole’ (2).

Although, the arum lily frog is not listed as endangered or threatened on the IUCN Red List, there is evidence of populations having disappeared due to the effects of urban and agricultural expansion and resulting habitat loss (3).

Whilst there has, in previous years, been speculation about the damaging effect that arum lily collection and sale has on the frogs, there is no evidence to support this. What this speculation has hopefully done, however, is to raise awareness about illegally harvested Western Cape flora. To avoid supporting the illegal sale of arum lilies (and many other precious indigenous plant species), be sure to buy flowers from legally licensed retailers in demarcated areas (as opposed to informal hawkers at traffic lights) (4).

I am itching to see an arum lily frog. Not because it is extraordinarily rare or in danger of disappearing, but because I’m amused at the number of times I must have passed an arum lily and been completely oblivious to the fact that it had a tiny amphibian in its clutches. I shall be peering into every arum lily from now on.

2. Tarrant J. A is for Amphibian ….and Arum Lily Frog [Internet]. The Gumby Legacy. 2014 [cited 9 December 2016]. Available from: http://www.gumbylegacy.com/a-is-for-amphibian-and-arum-lily-frog/