A Table Mountain Glossary: Mysteries behind the mountain’s many names 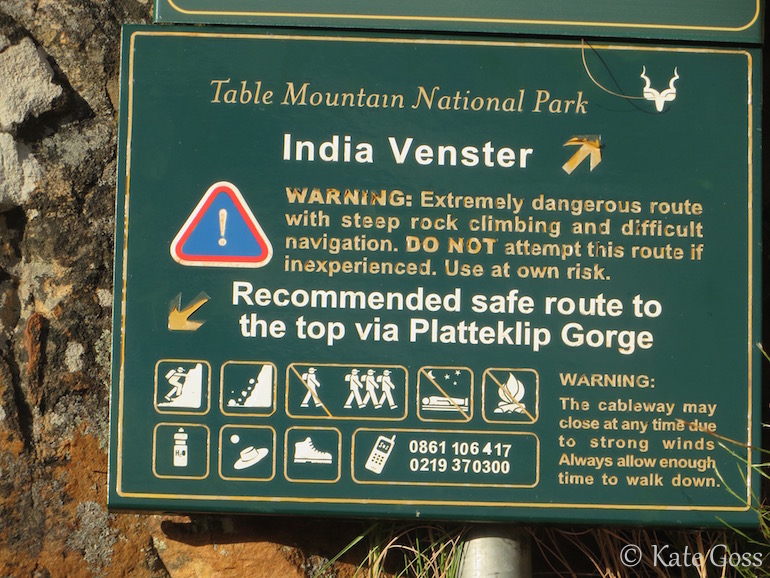 A Table Mountain Glossary: Mysteries behind the mountain’s many names

We spend our lives gallivanting up and down the mountain, crossing off poorts, pathways and landmarks as we go, often with no idea of how these sights came to be named. There are a wealth of fascinating theories out there, a few of which should be taken with a rather generous pinch of salt, and others that play a very important role in piecing together our city’s history.

This ‘glossary’ will stop you guessing and arm you with some interesting trivia for your next mountain mission.

The highest point on Table Mountain is named after Sir Thomas Maclear, an Irish-born South African astronomer. Maclear built that stone cairn (the one we all perch on for photographs) in 1865 for a trigonometrical survey while trying to measure the Earth’s circumference. But let’s not for a second think that we had Maclear all to ourselves; he’s also famous for the ‘Maclear Crater’ on the moon and ‘Cape Maclear’ town in Malawi. A man of many missions! (ref).

This steep but popular scramble up Table Mountain was named after a forestry nursery that existed at the ravine’s head from 1893 to 1910 (ref). The nursery was allegedly established for exotic plantation trees as it was believed that exotic trees would increase the water run-off in catchment areas. Several different species including Blackwood, Silver Birch, fir trees, pine and others were planted, some of which can still be found on the nursery site today!(ref)

The quickest, oldest and most direct route up the front face of Table Mountain translates from Afrikaans and Dutch to ‘Flat Stone Gorge’. Ironically, the route is anything but flat! It is here that the first recorded hike to the top of Table Mountain took place, carried out by a Portuguese captain called Antonio Saldanha in 1503 (ref)

An exciting and challenging route up the mountain beneath the cableway, so named for two reasons: The first being that the view of the green ravine from the city looks like the shape of India (with a little imagination!) and the second that there is actually a ‘venster’ (Afrikaans for window) along the route – a viewpoint framed by rocks that allows one to perch and look out across the face of the mountain (ref)

Valley of the Red Gods

This secluded valley, situated on the 12 apostles, is allegedly so named due to a curious situation many years ago when a member of the Mountain Club of South Africa supposedly quoted a line from Rudyard Kipling’s poem, ‘The Feet of the Young Men’. In trying to express to his fellow hikers that he needed to be alone, he quoted Kipling’s words ‘For the Red Gods call me out and I must go’ (ref) – and, evidently, to this day, the name stuck.

This pristine section of the mountain is accessible by permit only, due to the pristine Afromontane forest that exists there. It is believed to have derived its name from the bark of the orange-coloured saffron trees that were prevalent in Hout Bay at the time (ref).

Contrary to popular belief, the beautiful Cecilia Forest in Newlands is not named after a Victorian Maiden, but rather after Cecil John Rhodes, who owned the land at the time (ref: Lundy, 2014: Easy Walks in the Cape Peninsula). What’s still left for us to wonder, however, is why the forest was given a female adaptation of his name!

Smuts Track runs along the top of the mountain from the top of Skeleton Gorge to Maclear’s Beacon. It gets its name from Jan Smuts, once president of South Africa, whose feet walked this path every day until his mid seventies. (ref)

One of the most popular hiking routes on the Western side of Table Mountain, Kasteelspoort was given its name as it is a broad, open ravine that provides easy access to the Twelve Apostles, which the Dutch settlers used to call the ‘Kasteelberge’ (Castle Mountains) (ref).

Legend has it that Devil’s Peak’s name arose from a smoking duel between Dutch Pirate Jan van Hunks and the Devil. But there is more than one reason to suggest that this is a modern invention and the name was derived from other more plausible sources.

It can be seen from old maps that Devil’s Peak was originally named Windberg (for obvious Southeaster related reasons) as well as Duiwekop as the mountain was supposedly home to thousands of doves. It could be the case that ‘Duiwekop’ transformed into ‘Duiwelskop’ over the years, but this is unlikely as there are records of the mountain having been called ‘Devil’s Hill’ in even earlier years.

The most likely explanation then, provided by the Devil’s Peak Brewery, comes from the early maps used by Portuguese explorers which labeled the Southernmost tip of Africa, Capo di Diab – the Devil’s Cape. It’s very possible that the association with the Devil simply shifted from the Cape itself to the mountain, which is, after all, the path through which the Southeaster howls and churns up the Cape of Storms, making it very ‘devilish’ indeed (ref).

From its vantage point overlooking Table Bay and the Atlantic Seaboard, Signal Hill was originally used for just that – to send signals. Signal flags were used to communicate with ships coming into the bay, warning them of stormy weather.

Still situated on the hill today is the infamous Noon Gun, which provided a time signal allowing ships in port to check the accuracy of their marine chronometers. There were also other guns on Signal Hill that were fired to notify the public when a ship was in trouble and there was a likelihood of casualties on Cape Town’s coast (ref).