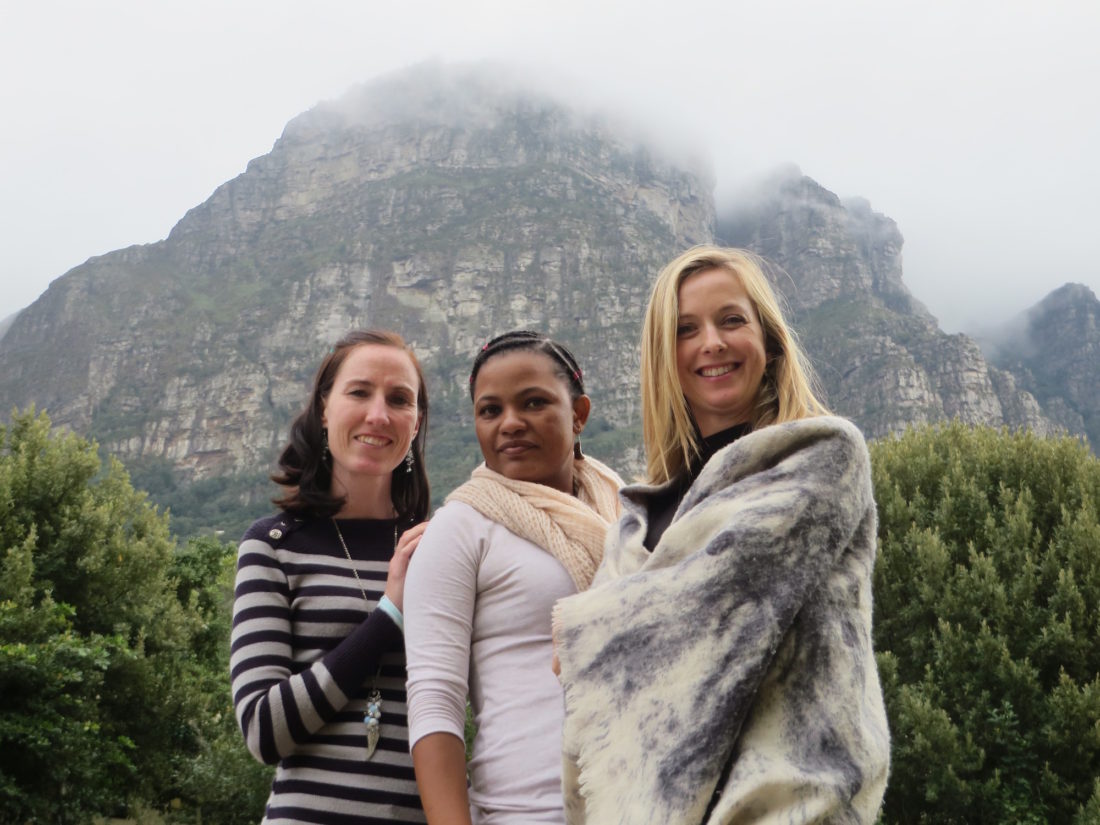 August 8, 2017 In In The Field, Introductory Series By Kate Black

In keeping with Women’s Month, I spent some time ‘behind the scenes’ at the Table Mountain Fund HQ, where I learned a bit more about the dynamic female trio that manages and coordinates the Fund and its projects on a daily basis. The fast-evolving world of conservation is not for the fainthearted, but it certainly has its rewards. The team shares some of their own experiences and advice…

Kerry’s childhood dreams of becoming a game ranger have resulted in something quite different. After studying an MSc in Ecological Assessment at Stellenbosch, her first job was with the Department of Environmental Affairs & Developmental Planning in George. She followed this with over a decade’s work at CapeNature, before moving into her role as Manager at TMF just last year.

When quizzed on what drew her towards TMF, Kerry explains that it was an ‘easy sell’. ‘It’s an organisation that can choose what it wants to focus on – and it really only unlocks and bolsters and catalyses and delivers’, she says fervently. Kerry also feels particularly privileged to work for a conservation organization that has already secured its funds (TMF was started as an endowment fund by WWF-SA in the 1990’s) – ‘a guarantee that the Fund will be around for some time, which makes it easier to build meaningful relationships with our partners,’ she says.

KB: What are your main goals at TMF?

KM: I’m hoping that by the time I move out of the position, I will have been instrumental in starting up one organization or one project that has real clout. For example, TMF are one of the founders of the Centre for Environmental Rights, and of the Cape Town Environmental Education Trust. I’d like to be part of something big like that. And then my other goal is to keep my staff happy. To have a team that I can rely on, who enjoy being here.

KM: My advice is not specifically aimed at women. I think we are blessed to be in a centre where those divides were broken down a long time ago. So it’s more about: be flexible and learn to recognize what your skills are. Although there’s a massive (environmental) sector, there are still so many niches; there are still so many scarce skills. Here’s a scary stat: by the time the 5-year-olds of today are working, 65 % of the jobs that they will be working in don’t yet exist.

KM: One woman that comes to mind is Thuli Madonsela. For her honesty, her courage, her gumption – and at the same time, she’s a lady. She’s gracious. She’s not in your face and harsh; she’s not playing a man’s game – she’s being a lady. And then the other woman is Licia Ronzulli, an Italian Minister who, in 2010, went to vote in the European Union parliament with her 6-week old baby strapped to her chest. For me, just that image is remarkable; the fact that she values motherhood and her career equally.

KB: What do you think will be the biggest challenge for the next generation of conservationists – both in the Western Cape, and globally?

KM: What I’m finding is that the longevity, or the sustainability, of our efforts is a problem, and things seem to be speeding up. 10 years ago, we thought we had done something – we had secured it – whether it’s a protected area or whether it’s a mode of operating, and things have already changed. And now they are changing in just two years, or one year. We now have mining in our protected areas – that for me is the biggest stop-sign I have ever seen! That’s the cornerstone to any conservation program, is the establishment of protected areas – what is the point of doing that if you allow mining in a protected area? What we thought was secure three years ago is no longer secure. So we’re not able to forecast what needs to be done.

With seven-and-a-half TMF years under her belt, Carla appears to have no less energy than when she first started. After completing a BSc in Conservation Ecology, she worked as a field guide at Grootbos Nature Reserve, then in hospitality at Vergelegen Wine Estate, before seeing a TMF job opening as her foot in the door to ‘real conservation’.

Carla now manages and coordinates TMF’s portfolio of projects – no small feat when there are often over 40 of them running at any point in time! Among plenty of other things, one thing that gets her up in the morning is TMF’s small grant projects, in her words ‘those life-changing projects – which may actually have a small environmental impact – but which you hope, by changing someone’s life, will enable them to operate on a different level and make a bigger impact.’

KB: What are your main goals at TMF?

CW: Our main goals are to run a good portfolio of projects and to manage those well. They’re not our projects to run, but we manage them from a point of view that we really are involved. It’s not a tick box – we want to make sure our investments really are making a difference.

CW: For me it definitely is ‘believe in yourself’ because you can be the change that you want to see. Your first job is actually the best way of getting experience and figuring out what the conservation sector is all about. Even if you have to take an internship and earn minimal money for the first year, the fact that you can network has so much weight. Offer to do everything, offer to go to those meetings that you have no idea what they’re about, get involved and get stuck in.

CW: Truly, from the bottom of my heart, it is my mother-in-law. She has looked after both my girls since the day they were born, and without her, I could never have had a full-time job. She’s totally selfless and gives incredible nurturing to my children, which I can’t give during the day. So I am grateful that I can actually come to work in a job that I love and know that my kids are being looked after.

KB: What do you think will be the biggest challenge for the next generation of conservationists – both in the Western Cape, and globally?

CW: I think, globally, our conservation challenges really lie in the fact that we’re competing with poverty. The bottom line is, when people can’t eat, they’re not interested in picking up the litter around their homes, because that’s really not the important thing. The important thing is that they get fed. So there’s this cycle of poverty which just affects everything – it affects jobs, sanitation, food security – so it’s hard to push a conservation agenda when those things aren’t being alleviated.

When Maki told her family she wanted to become a doctor so that she ‘could change peoples’ lives, they soon convinced her that the environmental sector would be just as good a place to achieve this goal. Hailing from the North-West province, Maki studied Environmental Science at the University of Venda, before starting work with SANBI in the Northern Cape. Before long, she had developed a strong interest in TMF, and her curiosity soon saw her landing the role of TMF Project Officer that she holds today.

Maki’s passion for TMF’s work stems from her desire to make a difference in peoples’ lives, and not just her own: ‘The work I am doing is not one-sided’, she says.’ It’s benefiting me in terms of getting the knowledge and skills, and seeing that people are happy as well’.

KB: What are your core goals at TMF?

MK: I think, as women, we are made to grow and nurture; we incubate everything. So we could be given any task and make a difference out of that little task. Women really have power to make a difference in this country in a bigger context. Women must learn to stand-up, or man-up, or woman-up! [laughing] And know that they are there to make a difference, not to sit and say ‘you know what, someone else is going to do it’. We have to take our own precious time and do something to make a difference.