All the small things: Captivated by the Cape Dwarf Chameleon 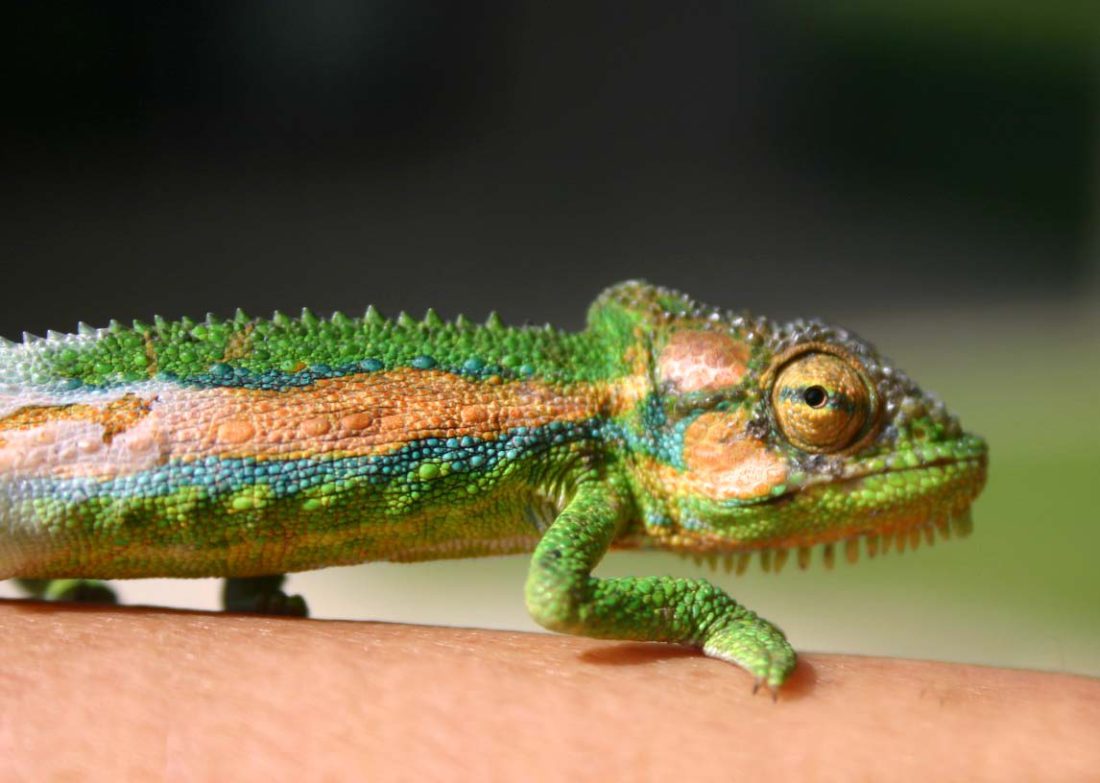 All the small things: Captivated by the Cape Dwarf Chameleon

Any creature that can change colour and look in two different directions at the same time is certainly worth learning more about. Chameleons are remarkable animals, known mostly for their uncanny ability to adopt an entirely different hue within a matter of seconds, but also for a number of other curious biological bents that make them some of the most fascinating reptiles around.

The Cape Dwarf Chameleon (Bradypodion pumilum) is one of 15 currently identified dwarf chameleons that are endemic to South Africa(1). This specific species is found only in a limited section of the Western Cape, around Cape Town, the Boland, and the mountainous coastline as far as Agulhas. Often making their way into suburban homes and gardens, they have become the subject of much curiosity. Here are some of their quirky features explained:

While many believe that chameleons change colour for the sole purpose of camouflage, recent research suggests that colour changes are a physiological reaction to the chameleon’s ‘mood,’ as a result of things like courtship, competition or stress. How on earth do they do it? The most recent theory proposes that, beneath their skin cells, chameleons have another layer of cells containing nanocrystals within a triangular lattice. As the chameleon reacts to certain situations, the spacing between the crystals changes, which in turn affects the colour of light that the crystals reflect(2). The base colour of the Cape Dwarf Chameleon is green with an orange lateral stripe, but this can change dramatically if provoked or stressed.

A tongue to be reckoned with

As with most chameleons, the Cape Dwarf Chameleon has a tongue that is up to twice the length of its body(3). Using a special muscle in its jaw, the chameleon is able to shoot its tongue out of its mouth in a fraction of second and catch insects that are a distance away.

As strange as it sounds, chameleons have eyes that can move independently from each other. They rotate and focus separately, enabling them to view different objects in completely different directions simultaneously. This gives them a full 360-degree arc of vision around their bodies(4) which is instrumental in spotting both predator and prey.

Chameleons are very well adapted for moving in trees. Each foot has five toes, grouped into two tong-like sections. The chameleon uses these two ‘tongs’ to grip tightly onto branches. The Cape Dwarf Chameleon belongs to the genus Bradypodion, which means ‘slow-footed’(5) – an apt description for the unmistakable sloth-like, swaying gait of a chameleon moving through the trees.

Because the Cape Dwarf Chameleon inhabits areas that are being rapidly urbanized, it faces the risk of its natural habitat being destroyed. SANBI researchers have used radio tracking at monitoring sites in Cape Town to try and understand the home ranges and habitat preferences of Cape Dwarf Chameleons, to allow conservationists to understand where habitat rehabilitation measures need to be put in place, and green corridors need to be considered(6).

The Cape Dwarf Chameleon plays an important role in regulating pest and insect populations, and maintaining stability in its ecosystem as a key predator. In the context of the broader threat of habitat destruction, there are a number of ways in which we can make our personal green spaces ‘happy homes’ for these intriguing animals. A chameleon-friendly garden needs a variety of large and small shrubs that can be used for perches and protection. They eat moths, butterflies, grasshoppers and flies, so try to attract these insects with a variety of flowers and a compost heap(7).