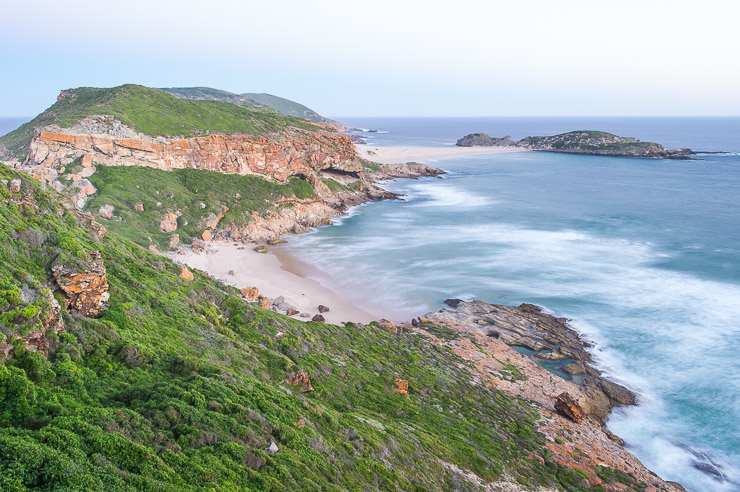 Often referred to as the Cape Point of the Garden Route, Robberg Nature Reserve lies on the edge of Plettenberg Bay and forms a long narrow peninsula that stretches out for approximately 4kms into the sea. The terrestrial section of the nature reserve is bordered by a productive and critically important marine protected area that hosts whales, dolphins, seals, sharks and numerous critically endangered line-fish species. Birdlife is prolific and a number of fynbos endemics such as the Cape Rock Thrush, Cape Sugarbird and Orange-Breasted Sunbird can also be found on the reserve.

The fynbos covered peninsula has a rich human history that dates back some 120 000 years with Nelsons Cave providing some of the best evidence of the Stone Age inhabitants. Scenery is spectacular and an excellent system of trails offers three choices of circular hiking routes of increasing difficulty and distance. Given that the entrance gate stays open late in the evenings there is ample opportunity for exploration and the high-points of the reserve give the chance to watch the winter storms that approach from the west or to watch sharks and large game fish patrolling the backline. The Cape Fur Seal colony is most active in the early morning and late afternoon and dolphin pods cruise the shoreline during early morning and again in the late afternoon.

Given that hiking is essential to traverse the reserve, a good comfortable backpack is necessary as is additional water (there is no freshwater available beyond the reserve entrance) and sunscreen. A wind and rainproof jacket is also suggested. Be extremely cautious along the cliff sections of the hiking trails as strong gusts of wind suddenly sweep up the cliffs.

From the N2 west of Plettenberg Bay, take the Piesangvalley road turnoff. Proceed for 3km, then take the Robberg Road to the right. About 4km along this road, you will find the turnoff to Robberg Nature Reserve. Proceed until you reach the entrance gate.