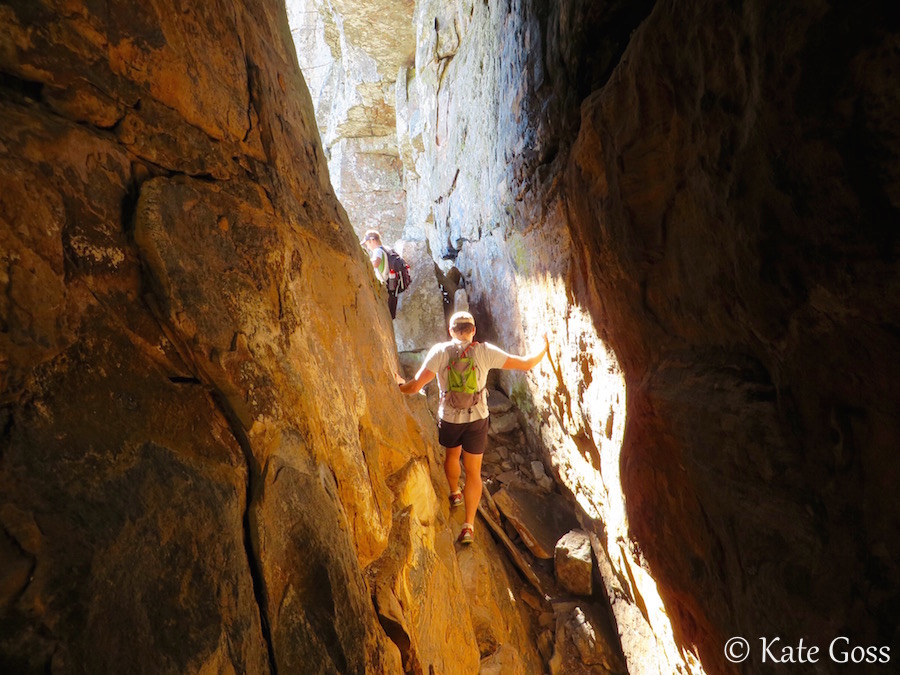 If you look at Table Mountain’s front face, you would never, for a second, imagine that behind the sheer, craggy cliffs there would exist a 3-dimensional world of cracks and crevasses, big enough for a human… well, only just.

We tackled Right Face – Arrow Face Traverse as part of our mission to explore as many of Table Mountain’s traverses as possible. Having conquered Carrel’s Ledge not so long ago, we had a sneaky suspicion of what we were in for. So we set off, armed with some snacks and our flask of tea, and some very informative instructions which would hopefully guide us along the route.

The ins and outs

Starting at the cableway, we climbed up the steep slope, following the usual route up as if heading to India Venster. After most of the fun bits (the chains and rocky scrambles) that the India Venster route has to offer, we emerged onto a flattish area directly below the Upper Cableway Station. From here we veered left off the main drag onto a smaller path, descending to a lower bushy ledge where the Right Face – Arrow Face Traverse began.

What happens after this was – to say the least – a bit of an adrenaline rush. After walking along a narrow, but not overly exposed, ledge for a little while, the path simply seemed to end.

‘Oh well,’ I thought, feeling far too pleased, ‘that’s that’.

But it definitely wasn’t. My co-pilots had been paying close attention to our instructions and were by no means about to throw in the towel. As I turned to look ahead again, I saw one of them disappearing. Edging closer, I noticed the narrow crack in the rock face. Bells and whistles stashed, backpacks off, we pulled ourselves up through the rocks into the first crack – a rather tight squeeze width-wise, so we didn’t linger too long.

As we wormed our way out the other side, we again hit what looked suspiciously like a tree in our path – and a dead end at that. But our trusty instructions ordered us to climb up above the tree, and that we did, continuing onto a ledge that flip-flopped all of our stomachs. This very exposed ledge is not for the fainthearted and our little team of three kept our eyes front and hands glued to the rocks, suddenly more than happy to get up-close and personal with the prickly fynbos that had seemed rather unfriendly earlier.

Right at the end of the narrow shelf, a crack became visible on our right, and we (relieved to get off the ledge) squeezed into a second crack system, quite a lot larger than the first. These cracks stretch meters high so standing up isn’t an issue – but they do require a bit of shimmying through the narrower bits. Thinking back, it was an incredible feeling to know how high up we were, and how exposed we would be if we didn’t have that huge wall of rock between us and the drop-off.

At the exit to this crack, we stopped for a cup of tea (perhaps the most adrenaline-filled cup of tea of our lives!) and then started our mission along the last few ledges towards Yellowwood Ravine, which would wind us, with a bit of bundu-bashing, back to reality.

For the trusty instructions that guided us on our adventure, click here.